Betsy McGaughey is a professional liar. She lies for a living, on behalf of right wing causes. Her most famous lie was the now-infamous and non-existent “death panels” in the Affordable Care Act that she extracted from her rectum and made them an immediate talking point among conservatives. Now she’s lying by blaming the measles outbreaks on immigrants:

But it’s not just anti-vaxxers who are to blame for the outbreak, McCaughey said. She also blamed the measles outbreak on immigrants, saying that “sadly our federal government is not taking any responsibility at all for preventing people who are carrying measles from entering the country.”

J.D. Hayworth, the former Arizona congressman and host of “America’s Forum,” was eager to blame the measles outbreak on immigrants as well, particularly the Central American children who fled to the southern border earlier this year who, as far as we know, have absolutely no connection to the measles outbreak that started at Disneyland. (In fact, Guatemala, El Salvador and Honduras, where most of the children came from, have higher measles vaccination rates than the U.S.)

“You’re just talking about legal immigration, and you take a look at the last year and the influx of juveniles from Central America and obviously we have problems, so there are a couple of reasons at work,” Hayworth said.

“So, Betsy, you’re telling us that part of it is an anti-vaccine movement, but the other part is illegal immigration,” he prompted.

“It’s immigration of all sorts,” McCaughey said, citing the case of unvaccinated Amish missionaries (U.S. citizens) from Ohio who carried the disease back from the Philippines and a outbreak in Houston in the 1990s that reportedly stemmed from immigrants from Mexico but was worsened by low vaccination rates.

And now, a word from reality: Vaccination rates for measles are actually higher in Mexico and Central America than in the United States. 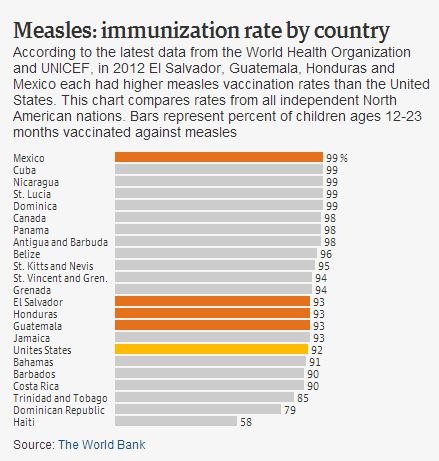 But why let a little thing like facts get in the way of a politically convenient xenophobic rant?

January 28, 2015 European Vacation 2: Electric Boogaloo
Recent Comments
18 Comments | Leave a Comment
Browse Our Archives
get the latest from
Nonreligious
Sign up for our newsletter
POPULAR AT PATHEOS Nonreligious
1