Came across this bizarre website put up by some guy named Charles Hubbard, who lives in Oklahoma City but has a serious problem with Kevin Durant, star of that city’s NBA team. You see, Durant endorses Nike and Nike is evil because she was the Greek goddess of victory. The site doesn’t have any actual text, only images of text, so I’ll have to take some screenshots. Apparently God is punishing Durant with injuries:

Really? What about the other nearly 300 NBA players who have endorsement deals with Nike? And why didn’t God punish Durant before? He’s been with Nike since he was drafted and has had incredible success, winning last year’s MVP award. Why did God let him become one of the greatest players in the league if he’s so mad about it? And why didn’t he keep Lebron James from winning two championships and multiple MVPs? Why didn’t he injure Michael Jordan, the greatest NBA player ever, and prevent him from winning 6 titles and becoming a legend?

Gee, what could it be that might motivate someone to put something up this idiotic? Oh yeah, money. 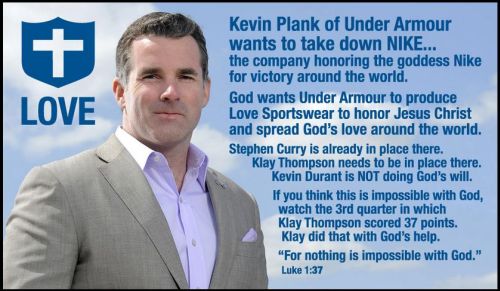 It’s a big ad for Under Armour, the company that tried to sign Durant away from Nike and failed. And by the way, Durant had no choice in this. His previous contract with Nike gave that company the right to match any competing offer he received and he would have to stay with them if they did. When Under Armour made a massive offer they didn’t think Nike would match, they were wrong. It was matched and he had to stay with Nike.

February 2, 2015
Join the Campaign to End Blasphemy Laws
Next Post