57% of Republican Voters Would Officially Make America a Christian Nation

A new survey of Republican primary voters by Public Policy Polling contains a rather disturbing result. When asked if they would support or oppose “establishing Christianity as the national religion,” a staggering 57% said yes, 30% said no and 13% said they weren’t sure.

Note also that the number varies depending on which potential presidential candidate they support. Huckabee supporters want America officially named a Christian nation by an incredible 94%. The only candidate whose supporters do not support it is Scott Walker. Two more interesting results: 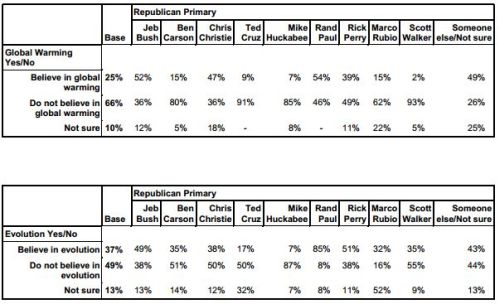 Again, not the difference. Supporters of Ted Cruz and Mike Huckabee are the most scientifically ignorant.

One word of caution: This survey has a very small sample size, only 316 people. That does raise the margin of error. I’d feel more comfortable citing this if the sample size were at least twice that much.

February 26, 2015 Saudi Arabia Arrests Men for Dancing at Birthday Party
Recent Comments
29 Comments | Leave a Comment
Browse Our Archives
get the latest from
Nonreligious
Sign up for our newsletter
POPULAR AT PATHEOS Nonreligious
1