Roy Moore’s son Caleb was arrested for drug possession — again — on Sunday after a search of his vehicle showed a bag of marijuana and Xanax pills for which he did not have a prescription. Naturally, he blames it all on a witch hunt by those evil liberals against his oh-so-saintly father.

Caleb Moore, the son of Alabama Chief Justice Roy Moore says that his arrest on Sunday for possession of marijuana and prescription tranquilizers is part of a liberal plot to bring down his father and “destroy” his family.

According to AL.com, the 24-year-old took to Facebook on Monday afternoon to decry the “crooked cops” who arrested him and to declare his innocence.

“This is nothing more than a prime example of how media and crooked police officers and critics of my dad try to not only destroy his career for what he stands for but will go as far as trying to destroy his family. I am not a drug user as the drug test taken today will show. As for the malicious possession charges, justice will be served,” he wrote.

AL.com’s Kelsey Stein said that, according to court documents, police responded to a report of a break-in at a residence in Troy, Alabama. When officers arrived at the scene they found Moore and several other young men standing around a pickup truck that smelled strongly of marijuana.

That’s not an argument likely to have much traction in court and his track record is certainly not going to help. This is the third time in four years he’s been arrested for drug possession (along with driving under the influence) and he’s pleaded guilty the previous two times. After those previous arrests, Roy Moore named his son the executive director of the Foundation for Moral Law, but that didn’t last long. Caleb also has a penchant for racist and juvenile tweets: 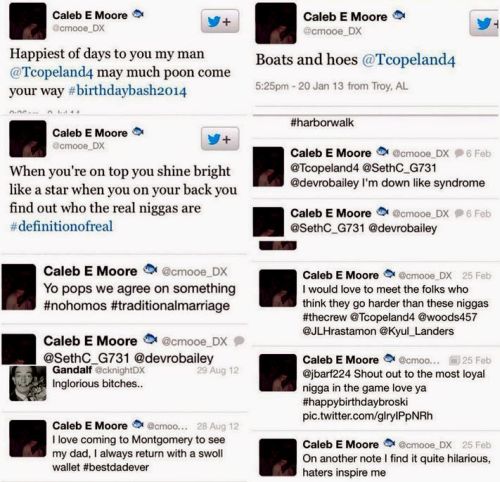 March 18, 2015 Cop Reinstated After Being Fired for Preventing Brutality by Others
Recent Comments
23 Comments | Leave a Comment
"JALY5vN.org"
aditi New Fox Anchor a Q Anon ..."
"Your argument is "Things exist, therefore God," and you just simply believe that there has ..."
Alex Zer0 And Yet Another Stupid Atheist Meme
"Oh hell. Just now got back here. Requiescat in pace, Ed, or just feed the ..."
(((Hornèd Pontilibratificus))) Saying Goodbye for the Last Time
"So many religious comments from muslims and the atheist religion..."
Drakenfly Carson: Islam Not a Religion, but ..."
Browse Our Archives
get the latest from
Nonreligious
Sign up for our newsletter
POPULAR AT PATHEOS Nonreligious
1