I’ve seen this one a bunch of times and it always irritates. First of all, it appears to be a fake quote. It’s attributed to the book Contact, but it does not appear in that book. Even if it did, it would be spoken by a character, not by Sagan. And I find it highly doubtful that he would say something this dumb: 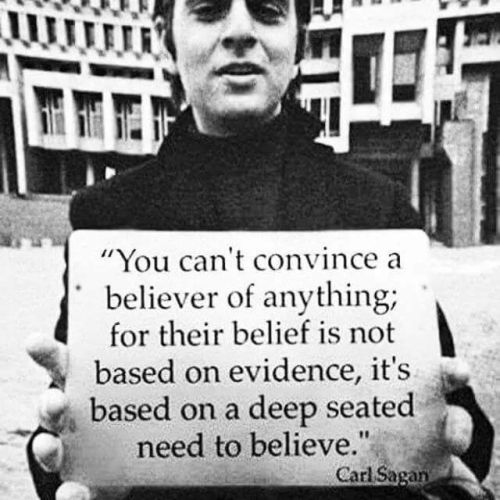 And no matter who said it, it’s obviously false. The overwhelming majority of atheists used to be believers, so obviously they can be convinced. Not all of them, of course. Lots of believers are completely impervious to evidence or reason. But guess what? Lots of atheists are too. The kind of atheists who share bullshit like this thinking it’s profound or true.

April 6, 2015 Teacher Distributes Bibles During Easter Week
Recent Comments
15 Comments | Leave a Comment
"It is comedy gold to me that the trolls/bots are still posting on a blog ..."
Richard Rutishauser Saying Goodbye for the Last Time
"This is all basically just Christianized Numerology...Need we remind you about Occult Practices go read ..."
BlueFeather Forget BC and AD. It’s now ..."
"I am thinking the same thing .It is at times like this I wish there ..."
david coxill Saying Goodbye for the Last Time
"Thanks for being so forthright."
Gary Whittenberger Supreme Court Justice Jay Sekulow?
Browse Our Archives
get the latest from
Nonreligious
Sign up for our newsletter
Related posts from Dispatches From the Culture Wars