After Hillary Clinton declared her candidacy for president (duh), Donald Trump responded by first posting and then deleting a tweet that can only be described as inane, sexist and absolutely dripping with irony given his own marital history. 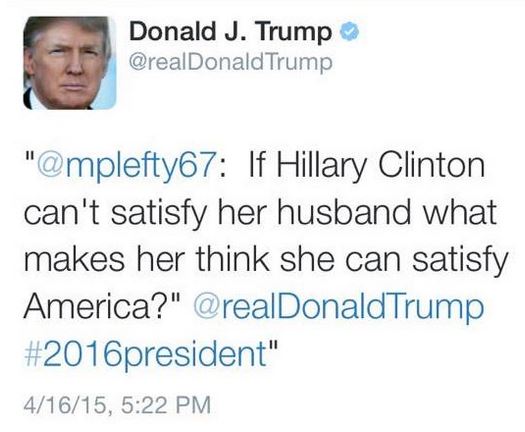 How ridiculous is this? Let us count the ways. We’ll start with the obvious, the dishonest use of the term “satisfy.” She’s running for president, not for someone’s spouse. And even if she were, it’s unseemly to blame the victim of adultery for her spouse’s adultery. More importantly, the blatant sexism and hypocrisy of the whole thing. Trump has been married three times, to a succession of blonde models that he upgrades every few years to a younger version. Did they divorce you because you couldn’t satisfy them sexually, Donald? Would that be a reasonable assumption for someone to make and then use it as an argument against voting for you? Of course not, that only applies to other people who aren’t you.

And Donald, you haven’t seriously deluded yourself into thinking that a bunch of models decades younger than you are only with you because you satisfy them sexually, have you? Because that would be absolutely hilarious if you have. In fact, I don’t think they’re anything more to you than trophies, tokens of your status as a rich man. Like the turtles, it’s sexism all the way down.

April 20, 2015
A New Low in Anti-Marriage Equality Arguments
Next Post

April 20, 2015 More Details on That Horrible Sex Ed Class
Recent Comments
9 Comments | Leave a Comment
"Your argument is "Things exist, therefore God," and you just simply believe that there has ..."
Alex Zer0 And Yet Another Stupid Atheist Meme
"Oh hell. Just now got back here. Requiescat in pace, Ed, or just feed the ..."
(((Hornèd Pontilibratificus))) Saying Goodbye for the Last Time
"So many religious comments from muslims and the atheist religion..."
Drakenfly Carson: Islam Not a Religion, but ..."
"You were NEVER a christian. What you typed out is the typical day for a ..."
Drakenfly Carson: Islam Not a Religion, but ..."
Browse Our Archives
get the latest from
Nonreligious
Sign up for our newsletter
POPULAR AT PATHEOS Nonreligious
1