Your Daily Dose of Hyper-Nationalistic Bullshit

Your Daily Dose of Hyper-Nationalistic Bullshit May 11, 2015 Ed Brayton

I saw this meme on Facebook and it just irritated the shit out of me. It’s pure emotional blackmail, which is what this kind of empty nationalism always is. And it’s using a disabled soldier to make a political point, when that political point is flatly wrong. 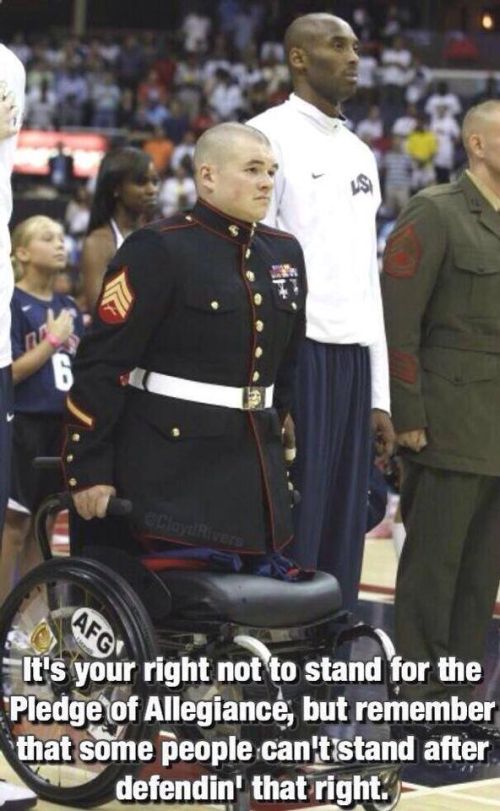 First of all, it’s just false. That soldier did not lose his legs defending the right not to say the pledge of allegiance. There is no war we have fought since at least WW2 where the declared enemy posed even the most remote threat to the United States at all, much less to our freedom. In fact, the only possible threat to our freedom is the government that sent that soldier off to lose his legs fighting an enemy that was no threat to use whatsoever.

May 11, 2015
LA Legislator: Scientists Burned People at the Stake!
Next Post

May 11, 2015 Netanyahu Agrees to Give Back Special Haredi Privileges
Recent Comments
19 Comments | Leave a Comment
"I am thinking the same thing .It is at times like this I wish there ..."
david coxill Saying Goodbye for the Last Time
"Thanks for being so forthright."
Gary Whittenberger Supreme Court Justice Jay Sekulow?
"Just for the record, and so no one can say that I'm not mature enough ..."
S. Arch Supreme Court Justice Jay Sekulow?
"It’s done, Ed. It’s done. Wish you were here (and realise you’re not going to ..."
Thomas Fitzpatrick Saying Goodbye for the Last Time
Browse Our Archives
get the latest from
Nonreligious
Sign up for our newsletter
Related posts from Dispatches From the Culture Wars