A Third of Republicans Think Obama is Invading Texas

As evidence of just how far the Republican party has gone off the conspiracy theory deep end, 1/3 of Republicans polled by PPP think that the Jade Helm 15 military training exercise means “the government is trying to take over Texas.” Almost another 1/3 haven’t made up their minds. Only 40% say they don’t think that’s true.

Interesting that Ted Cruz supporters buy into it by a huge margin, 56% to 21%, and a full 76% of Rick Perry supporters think the federal government is plotting to take over a state that is already under their control. That’s bloody genius. And the Tea Party contingent is even worse: 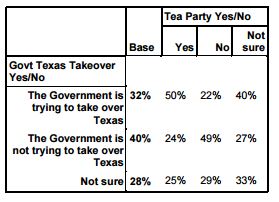 None of this should be remotely surprising, of course.

May 15, 2015
Could the Patriot Act Actually Be Reined In?
Next Post

May 15, 2015 Rand Paul's Twisted Argument for Ignoring the Plight of Iraqi Refugees
Recent Comments
23 Comments | Leave a Comment
Browse Our Archives
Related posts from Dispatches From the Culture Wars