For the fourth entry in my series on stupid atheist memes, I present: 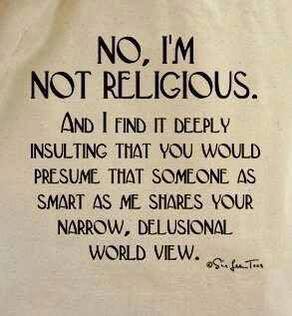 Ugh. So much wrong with this. There are two possible ways to take this:

2. Not being religious makes me smarter than those who are religious.

This is just ego-stroking, simpleminded bullshit. And if you find it insulting for someone to say that, that’s just too fucking bad.

May 16, 2015
O'Reilly Blames Decline of Christianity on Rap Music
Next Post

May 16, 2015 The Absurd Reaction to Michelle Obama's Speech on Racism
Recent Comments
49 Comments | Leave a Comment
"OnlySky is now live: https://onlysky.media/I am adding Ed to my OnlySky authors shortcuts folder so ..."
Thomas Fitzpatrick Saying Goodbye for the Last Time
"Hi ,for anyone wanting to follow the friendly atheist on Onlysky, it will go live ..."
david coxill Saying Goodbye for the Last Time
"Oh yes.. The privilege of being called names by people who have zero understanding what ..."
Standingbear Gallups: Satan Has Convinced Christians They ..."
"I wouldn't mind idiots saying "Black Lives Matter" IF They Meant it.Clearly that is not ..."
Standingbear Gallups: Satan Has Convinced Christians They ..."
Browse Our Archives
get the latest from
Nonreligious
Sign up for our newsletter
POPULAR AT PATHEOS Nonreligious
1