Stop me if you’ve heard this one before: Christian minister routinely rails about the evils of The Gay and it turns out that he’s gay himself. And it’s happening right here in Michigan, where a Lutheran minister from Midland was caught because he has an account on Grindr. Oh, and he’s a top. 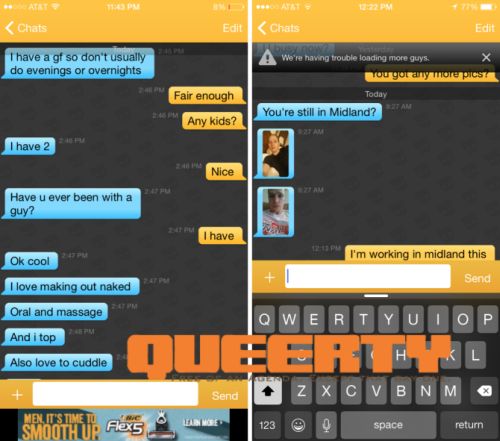 In an email exchange with Queerty, Makela confirmed the authenticity of the screen captures but declined to comment.

He also told Queerty that he had “resigned” from his position at the church after the story surfaced, and that his wife and senior pastor had been made aware of his extracurricular activities.

But his community also deserves to know. If Makela made even one LGBT kid at St. John’s “Christ-based” elementary school, their parents, friends, family or anyone who ever stepped foot in the church feel like being true to yourself is shameful (and it seems all too likely that he did), then we’re glad to share his hypocrisy with the world.

Now the church has put out a statement urging their parishioners not to read the Queerty article lest they come face to face with the “details of the sin.”

“Pastor has acknowledged that there was sin and repentance,” Kempin reassures his flock. Kempin concedes it’s the “end of our time together in ministry,” but that he encourages churchgoers to pray for Makela and his family.

Makela’s resignation is difficult enough, Kempin continues, but “to make matters worse, though, the details of sin that have been kept confidential are being posted online by those who seek to do harm to the Makela family and to St. John’s.”

“I write this to you to warn you that you may be confronted with the details of the sin,” Kempin cautions parishioners.

Makela and church leadership have taken down Facebook pages that the media might wish to rifle through in search of incriminating evidence. “But the internet and age of communication being what it is,” Kempin laments, “I have no way of guaranteeing that you will not come across this information in some way.”

Yeah, if they find out their pastor is a flaming hypocrite, it might make them reconsider their own positions. And we can’t have that, can we?

May 21, 2015 Breastaurant Memo the 'DUH' Moment of the Year
Recent Comments
50 Comments | Leave a Comment
Browse Our Archives
get the latest from
Nonreligious
Sign up for our newsletter
POPULAR AT PATHEOS Nonreligious
1