As I’ve said many times, it’s virtually impossible for someone to be so extremist that today’s Republican party leaders and candidates won’t identify themselves with them. They’ll go on the shows of Michael Savage, Gordon Klingenschmitt, Rick Wiles, Bryan Fischer. Ted Cruz is now doing a townhall event with Larry Pratt of Gun Owners of America.

Gun Owners of America, the radical and influential gun group that boasts that it is far to the right of the NRA, announced in an email to its members yesterday that it will be holding a series of “tele-town hall meetings” with Republican presidential candidates in order to vet the candidates on their gun-law orthodoxy.

The “first of several” calls, to be held next week, will feature Texas Sen. Ted Cruz, a clear favorite of Gun Owners of America’s executive director, Larry Pratt. 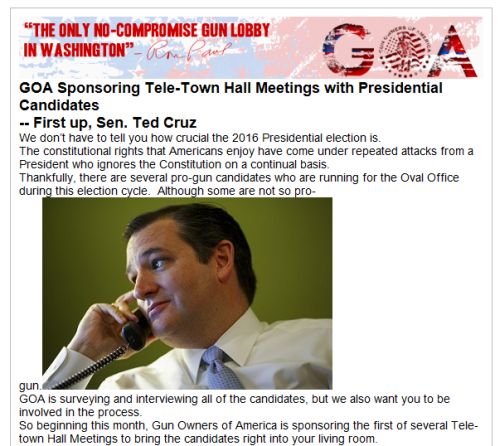 Pratt is a toxic figure on the incredibly-far-right, where the militias and white supremacists hang out. This guy was too extreme for Pat Buchanan’s presidential campaign in 1992, for crying out loud, because he was found to have palled around with white supremacists and militia-types. There is no far-right conspiracy theory he does not accept and promote. But today’s Republican party has nearly been swallowed whole by the far right, so even the party’s highest elected officials are more than happy to appear with him.

May 24, 2015 Brimelow: States Must Secede to Protect 'White Rights'
Recent Comments
7 Comments | Leave a Comment
Browse Our Archives
get the latest from
Nonreligious
Sign up for our newsletter
POPULAR AT PATHEOS Nonreligious
1