Mike Huckabee and the Ark of the Covenant

Mike Huckabee and the Ark of the Covenant May 27, 2015 Ed Brayton

At the risk of making your face melt, I refer you to this article in Mother Jones about Mike Huckabee’s endorsement of a crank amateur archaeologist named Harry Moskoff who claims to know where the real Ark of the Covenant is. Some details:

Harry Moskoff wouldn’t immediately strike you as the guy to discover the true location of the Ark of the Covenant, the chest that supposedly once held the stone tablets on which the Ten Commandments were written. He was born in Canada, studied jazz at Berklee College of Music, worked in IT, and started a company that specialized in copyright infringement claims when he moved to Tel Aviv 10 years ago. But in his free time, the ordained rabbi has dabbled in biblical archeology, poring over ancient texts and contemporary works, in search of any unturned stone that might help him track down the ark.

“I came up with a theory via Maimonides as to where the ark is located, which I later discussed with rabbis and archeologists in Israel,” he told the Times of Israel in 2013. “It was a Jewish Da Vinci Code type project.” His grand theory? It’s been in Jerusalem all this time, buried underneath the courtyard of the Temple of Solomon.

Huckabee wrote a blurb for Moskoff’s book on the subject: 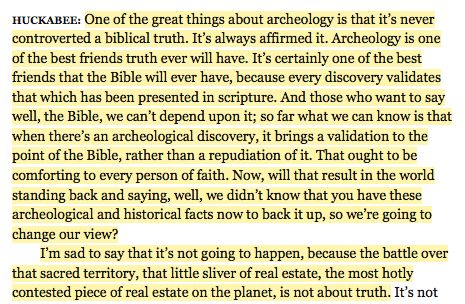 This all reminds me of another crackpot amateur archaeologist, Ron Wyatt, who claimed to have actually found the Ark of the Covenant in a cave beneath the hill of Calvary, where Jesus was supposedly crucified. And not only that, but it had the dried blood of Jesus on it, which he somehow managed to bring back to America to have it tested (but for special, lucky, magic reasons, he couldn’t bring back the Ark or even get pictures of it). When tested, the blood had only 24 chromosomes — 23 from Mary, he said, and 1 from God, proving that he was born of a virgin. Like the Ark, however, those test results could never be examined either.

May 27, 2015
Dick Morris Predicts Hillary Clinton to Crash in Primary
Next Post

May 27, 2015 Rubio Jumps on the Faux Persecution Train
Recent Comments
36 Comments | Leave a Comment
Browse Our Archives
get the latest from
Nonreligious
Sign up for our newsletter
POPULAR AT PATHEOS Nonreligious
1