Two months ago, Michigan Gov. Rick Snyder said he would veto a RFRA bill that was working its way through the legislature, effectively killing it. But now he’s signed a bill into law that explicitly allows discrimination by adoption agencies against gay couples.

Snyder signed the bills without ceremony, just one day after the Legislature sent him the legislation. The law goes into effect immediately. The ACLU of Michigan vows to challenge it.

People keep referring to this as an “adoption RFRA” bill, but that isn’t accurate. RFRA has never been used to get an exemption from anti-discrimination laws at the state or federal level, which means this bill is worse than RFRA. But as bad as it is, I’m irritated that so many opponents of it feel the need to lie about it. For instance, one group immediately put out this meme: 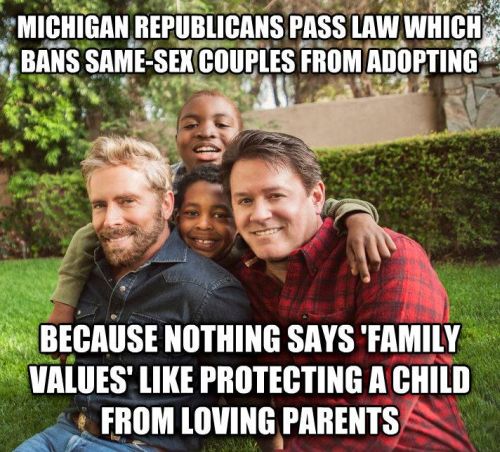 No. It does not ban adoption by same-sex couples. Actually, that’s already banned in Michigan. Only individuals or married couples can adopt and gay couples can’t get married, so there’s already no adoption by gay couples in Michigan. This bill was passed just in case the Supreme Court overturns the ban on same-sex marriage, which would immediately allow gay couples to adopt if they’re married. But it does not ban gay couples from adopting, it only allows religious adoption agencies from having to facilitate such adoptions. And the law does require them to refer a gay couple to an agency that would do the adoption.

The bill is bad enough, there’s no need to exaggerate it or lie about it. But as James Hanley noted sarcastically on Facebook, “We’re on the side of truth and justice; we don’t need to worry about little things like honesty.” Unfortunately, that attitude is far too common on both sides.

June 14, 2015 Republican Strategist Defends the Indefensible
Recent Comments
8 Comments | Leave a Comment
"Hi ,for anyone wanting to follow the friendly atheist on Onlysky, it will go live ..."
david coxill Saying Goodbye for the Last Time
"Oh yes.. The privilege of being called names by people who have zero understanding what ..."
Standingbear Gallups: Satan Has Convinced Christians They ..."
"I wouldn't mind idiots saying "Black Lives Matter" IF They Meant it.Clearly that is not ..."
Standingbear Gallups: Satan Has Convinced Christians They ..."
"The ironic thing is.. Black lives Clearly do not matter.Why else would you ignore the ..."
Standingbear Gallups: Satan Has Convinced Christians They ..."
Browse Our Archives
get the latest from
Nonreligious
Sign up for our newsletter
POPULAR AT PATHEOS Nonreligious
1