Ladies and Gentlemen, the Dumbest Tweet Ever June 22, 2015 Ed Brayton

We’ve seen some truly ridiculous things said about the murder of nine people at an historical black church in Charleston, South Carolina, but two tweets from Miami Herald columnist AJ Delgado have to win some sort of award for sheer stupidity. Her account has now been deleted, so here are the screenshots. The first one: 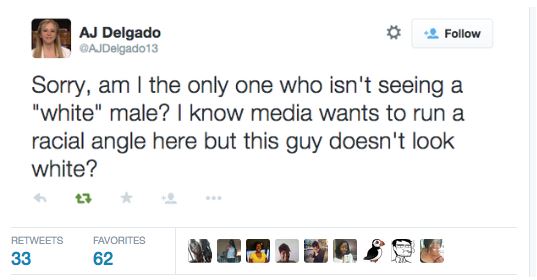 Yeah, that damn media trying to “run a racial angle” when a white supremacist, who couldn’t look any more white if he were Opie Taylor with a mullet wearing all polyester and eating a mayonnaise sandwich while listening to Hank Williams Jr., shoots up a black church. But she seems to think that’s an incredibly rare event: 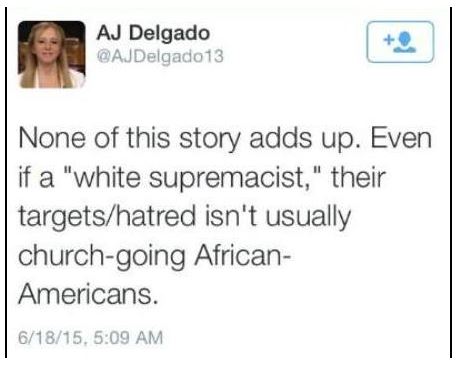 Did you study American history at all? In 1963, there were four terrorist attacks on black churches in Birmingham, Alabama — so many that they began to refer to it as Bombingham. Attacking black churches has been a staple of white supremacist terrorism for decades. How can someone be this fucking stupid and get a job as a newspaper columnist? I’m asking you, Chuck Norris.

June 22, 2015
Savage: Pope Francis is a Commie! And the Antichrist, or Something.
Next Post

June 22, 2015 Pakistani Muslim Leaders Defend Blasphemy Laws
Recent Comments
22 Comments | Leave a Comment
"Ah, wouldn't this violate the new laws being passed about making white kids uncomfortable? They ..."
SPRuis Legislators Pushing Bible Courses in Public ..."
"There is also the factor that "Bible literacy" courses being taught are unfair to other ..."
Hominin Legislators Pushing Bible Courses in Public ..."
"OnlySky is now live: https://onlysky.media/I am adding Ed to my OnlySky authors shortcuts folder so ..."
Thomas Fitzpatrick Saying Goodbye for the Last Time
"Hi ,for anyone wanting to follow the friendly atheist on Onlysky, it will go live ..."
david coxill Saying Goodbye for the Last Time
Browse Our Archives
get the latest from
Nonreligious
Sign up for our newsletter
POPULAR AT PATHEOS Nonreligious
1