The neo-Confederate, southern nationalist League of the South has long tried to pretend that it didn’t really support slavery, just “freedom” for the Southern people, who are somehow at risk of “cultural genocide.” But LOS leader Michael White has now donned the white sheet and explicitly endorsed slavery as ordained by God. This is from an exchange he had on the LOS website: 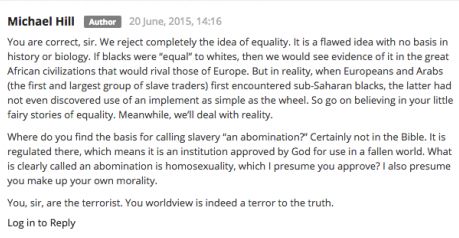 So there you have it. God wants the people of the land of Dixie to own slaves. And if you disagree, you’re obviously a terrorist. And guess what the LOS did this weekend? Held rallies in support of the Confederate flag. Tell me again how the Confederate flag isn’t about slavery.

July 7, 2015 SC Senator Goes on Inane Marriage Rant During Flag Debate
Recent Comments
0 | Leave a Comment
Browse Our Archives
get the latest from
Nonreligious
Sign up for our newsletter
Related posts from Dispatches From the Culture Wars