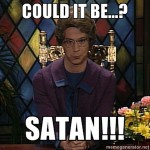 Alabama Chief Justice Roy Moore, true to form, told a church on Sunday that the Supreme Court justices who ruled in favor of same-sex marriage were influenced by Satan and that’s why they “destroyed the institution of God.” I didn’t even know God was an institution.

Moore, who made national news when he ordered the state’s probate judges to withhold same-sex marriage license in violation of a federal judge’s decision, addressed a congregation of about 150 people at Magnolia Springs Baptist Church in Theodore.

“How do they come out now and say that marriage, which is ordained by God, doesn’t mean what it’s always meant, between a man and woman?” Moore said. “Not between two men, two women, or three women and one man.

“See, they don’t have a definition. They’ve just destroyed the institution of God. Despite what they think, it’s not their doing. Satan drives us. He’s out there destroying everything God created including us as human beings.”

July 15, 2015 Another Republican Candidate Says God Wants Him to Run
Recent Comments
0 | Leave a Comment
"Hi ,for anyone wanting to follow the friendly atheist on Onlysky, it will go live ..."
david coxill Saying Goodbye for the Last Time
"Oh yes.. The privilege of being called names by people who have zero understanding what ..."
Standingbear Gallups: Satan Has Convinced Christians They ..."
"I wouldn't mind idiots saying "Black Lives Matter" IF They Meant it.Clearly that is not ..."
Standingbear Gallups: Satan Has Convinced Christians They ..."
"The ironic thing is.. Black lives Clearly do not matter.Why else would you ignore the ..."
Standingbear Gallups: Satan Has Convinced Christians They ..."
Browse Our Archives
get the latest from
Nonreligious
Sign up for our newsletter
POPULAR AT PATHEOS Nonreligious
1