Bigot: Even Teaching Existence of Gay People is ‘Child Molestation’

Two of the more virulent anti-gay bigots in the country got together this week when David Noebel went on Republican National Committee member Tamara Scott’s radio show in Iowa. They went on quite a tirade about the evils of The Gay, using the usual distortions to make listeners think that schools are now teaching kids in kindergarten about the joys of gay sex.

They were already down in kindergarten, first, second and third grades teaching the younger innocents,” he said, “And you talk about child molestation. This, to me, was child molestation. When you start teaching first-, second- and third-graders about the glories and wonders of the homosexual lifestyle, you know you’ve got a problem.”

Lamenting that “the Obama administration put a flaming homosexual in charge of a good portion of our public education,” he warned that “this is very serious stuff.”

“The game plan is to destroy Christianity,” he concluded, to Scott’s agreement. “That’s the game plan. Because they contend that Christianity has been very tough on the homosexuals for 2,000 years and now it’s time to get back at the whole thing and show them who’s really boss. So we’re in a very explosive cultural revolution.”

He added that he wasn’t sure if Western civilization could “survive another generation.”

Only in the mind of a bigot could one describe a book that merely shows that families headed by gay people exist as teaching them “the glories and wonders of the homosexual lifestyle.” There is no such thing as the “homosexual lifestyle,” of course, this is just a nonsense phrase that means “ewwwww, icky.” But as usual, it’s the mere existence of gay people that they find so offensive and dangerous. Because if gay people are seen as real people rather than evil abstractions, their ability to make their kids into bigots is diminished. 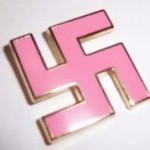 August 27, 2015
Apparently Rainbows Stab Bigots In the Gut
Next Post