So Much for that ‘War on Cops’ the Right is Imagining

So Much for that ‘War on Cops’ the Right is Imagining September 8, 2015 Ed Brayton

A police officer is killed in the line of duty. Right wing pundits and talk show hosts immediately seize on the opportunity to blame it on their political enemies, claiming that President Obama and Black Lives Matter is fomenting a “war on cops” and that this is the deadly result of their attempts to make the police stop engaging in widespread abuse, particularly against dark-skinned people. The problem: The evidence clearly disproves their argument.

Despite urgent warnings from police and others about a “war on cops” allegedly linked to the Black Lives Matter protest movement, statistics show 2015 is in fact shaping up to be one of the safest years for law enforcement in a generation.

According to the Officer Down Memorial Page (ODMP), which keeps data on officer deaths going back over 100 years, 24 officers have been shot and killed by suspects this year. This puts the US on pace for 36 non-accidental, firearm-related police fatalities in 2015. Each one of such deaths is a tragedy for the officers killed, their families and the communities they serve, but this would be the lowest total in 25 years, aside from 2013 which saw 31 such deaths.

A series of recent high-profile police deaths has sparked much of the rhetoric tying violence against police to anti-police-brutality protesters. On Friday, Harris County sheriff’s deputy Darren Goforth was gunned down from behind while filling his car at a gas station. The suspect, Shannon Miles, was arrested shortly thereafter and charged with capital murder. Miles has a history of severe mental illness and was found mentally incompetent to stand trial in 2012.

Neither Miles, nor any other person suspected of killing a police officer in 2015, has claimed affiliation with the Black Lives Matter movement or any related organization. Still, the attempt to make a connection has persisted as people work to make sense of the senseless killing.

That last sentence really should read “as people work to silence criticism of the undeniably racist nature of and destroy any move to reform and improve our criminal justice system.” Because remember, conservatives think that government is totally incompetent and can’t do anything right, except for two things: the police, the military and the intelligence services. Those three institutions are absolutely beyond reproach and if you dare to criticize them, you’re obviously a dirty commie bastard. They want “smaller government” except when it comes to those three institutions.

I’m sure it’s totally a coincidence that those just happen to be the governmental institutions that are most able to implement their authoritarian dreams of more surveillance, more imprisonment and more imperialism. See, it’s an abomination when the government actually tries to help improve people’s lives and those agencies that do that must be drowned in the bathtub. But when the government tries to intrude into our lives, oppress and even kill people, especially dark-skinned people, those “services” must be fully funded and given ever more power. 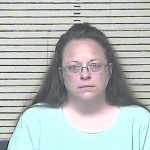 September 8, 2015 Staver Tells Lies Trying to Defend Kim Davis
Recent Comments
0 | Leave a Comment
Browse Our Archives
get the latest from
Nonreligious
Sign up for our newsletter
POPULAR AT PATHEOS Nonreligious
1