Tuesday is the end of the infamous Jade Helm 15 military exercises, which came and went with barely a whimper other than the inane bleatings of a bunch of paranoid jackasses. Texas hasn’t been taken over, the Walmarts of the Southwest have not been turned into FEMA concentration camps, Blue Bell ice cream trucks are not being used to transport the bodies of all the victims of the “invasion.” Gee, you mean all those people were full of shit like rational people said they were? Let’s recount some of their bizarre, dystopic fantasies:

That noted, here are a few things the conspiracy folks are worrying about, none of which I am making up:

That Jade Helm 15 is actually a psychological operation aimed at getting people used to seeing the military on the streets so they will not be tipped off when the invasion actually happens.

That Jade Helm 15 is an international operation (UN vehicles have been spotted) whose goal is to seize everyone’s guns.

That the military plans to round up political dissidents.

That the military intends to remove key political figures who might oppose the institution of martial law. (I’m pretty sure Democrats don’t have anything to worry about here.)

That the military is secretly using recently closed Wal-Marts to stockpile supplies for Chinese troops who will be arriving to disarm Americans. (I have to say this is my personal favorite.)

Alex Jones was, of course, at the forefront of pushing these paranoid conspiracy theories. The day before the exercises started, he told his credulous listeners:

The Jade Helm military exercise kicked off today and already the media is diligently beating away at “those crazy conspiracy nuts”. They’re all to happy to focus on some of the more unbelievable theories floating around, but not a single agency has discussed what we revealed months ago. You won’t hear this from the establishment media because they are complicit in the cover up.

And next day he “debunked” his critics who said that he was spreading conspiratorial bullshit that wouldn’t come true. But those critics were right, Alex, and you were, as always, completely full of shit. But will he ever admit that? Of course not. Will even one person who believed and spread that nonsense admit that they were wrong or stop listening to the people who did? Not likely. They’ll just move on to the next one.

How many incidents has Alex Jones claimed were finally the realization of his endless predictions of martial law, the government seizing our guns and rounding up “patriots” and killing them? I bet he averages about once a week. And yet it never comes true, ever, which seems to do nothing to prevent him from continuing to make the same claim or his followers from believing him every single time. He’s the boy that cried MARTIAL LAW!

You know what it reminds me of? The endless serious of right wing rallies that are going to attract millions of people to Washington, DC to kick Obama out of office. How many times do they have to plan thes things only to have a couple hundred dumbasses show up and mill around aimlessly for a while before they stop believing? How many times must the end-times people predict that Jesus is coming back any minute now before people wake up and stop believing them?

Credulity and paranoia are in nearly endless supply on the right wing. 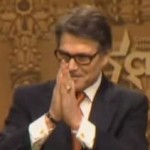 September 14, 2015 Trump: I'll Deport 11 Million Immigrants in Two Years
Recent Comments
0 | Leave a Comment
Browse Our Archives
get the latest from
Nonreligious
Sign up for our newsletter
POPULAR AT PATHEOS Nonreligious
1