Patheos Explore the world's faith through different perspectives on religion and spirituality! Patheos has the views of the prevalent religions and spiritualities of the world.
Someone dug up a video of Ben Carson addressing a conference called Celebration of Creation, put on by the Adventist News Network, and the claims and arguments he made were so bad that they really should be deeply embarrassing to him. I mean, this is the kind of stuff you’d expect from a teenager regurgitating Josh McDowell books, it’s so bad. Daniel W. VanArsdale transcribes some of it. Prepare to laugh.


“… there is abundant evidence, geological evidence, that there was a worldwide flood. Go up into the Andes Mountains and see all those fossils on the top of those mountains. I mean, these things, when you talk to the evolutionists about them, they always say the same thing … ‘well, we don’t understand everything.’ And I just say, ‘I’m not sure you understand anything.’

Why that is a lovely straw man you’re beating up there, Ben, but seriously…are you 12 years old? No, that is not what evolutionists say when you bring up the fact that there are fossils on top of mountains. Here’s what an actual geologist would say in response to that: First, the fossils are not on the tops of mountains, they are in the geologic strata at the tops of mountains. And a lot of them are marine fossils. You know why? Because the rock they are found in wasn’t at the top of a mountain when it was formed, it was often at the bottom of lakes and oceans, then later uplifted through tectonic action. We know this because we can observe it today. The only one who is showing that they don’t understand anything is you. If you made that claim in a geology 101 course, you’d flunk out immediately.

You know, they look at all those layers, and then they find some fossils in one of the layers, and they says this fossil is this many years old because it’s in this layer. So, that means this fossil is like a million years old. And then later on they say, ‘well, this layer is a million years old because this fossil which is a million years old is in it.’ You know, that’s like saying, you know, ‘the sky can be red or blue’. And you say, well, the sky is blue. And you say why is it blue? ‘Because it is not red.’ Well why is it not red? ‘Because its blue.’ Yeh, you know that’s known as circular reasoning. That’s how they explain the age of all these things, its very circular reasoning, and really it has no real scientific validity.”

And we have more total ignorance of geology. We can date strata both relatively (in relation to other strata) and absolutely (an actual age in years). The kind of stratigraphic sorting that he’s talking about here is done in the field, but is based on vast numbers of absolute dates attained through radiometric dating. We know that certain fossils only occur in rocks of a certain age because we can date the strata in which they are found and trace them all over the world and the results are absolutely consistent. Far from being a problem for geology, the relative and absolute dates act as a check on one another.

“You know, according to the theory [of evolution] it [the eye] had to go pukh! and there was an eyeball, overnight, just like that, because it wouldn’t work in any other way. And when you ask the evolutionists about that they say, ‘well, we don’t understand everything.’ And I say, ‘well, I don’t think you understand anything.”

Another straw man. Evolution not only does not say that, it cannot say that. The one thing that absolutely cannot happen if evolution is true is for a functioning eye to pop into existence all at once. Nor is it true that if you don’t have a fully formed modern eyeball, it won’t work at all. In fact, we have lots and lots of intermediate forms of eyeballs, from light-sensitive spots to the incredible eyes and vision of raptors, in nature.

“Well, now what about the big bang theory? I find the big bang really quite fascinating. Now here you have all these highfaluting scientists, and they are saying there was this gigantic explosion and everything came into perfect order. [31:19] … [32:16] Well, but I mean it’s even more ridiculous than that, because our solar system, not to mention the universe outside of that, is extraordinarily well organized to the point where we can predict 70 years away when a comet is coming. Now that type of organization, to just come out of an explosion? … [32:43] And then even if you want to use their own scientific theories, you know you’ve got this mass spinning and then it explodes. In physics we have something we call angular momentum and it is preserved, so it should be preserved in any orbit of anything that is effected by gravity around a planet, which means everything has to traverse in the same direction. Well it doesn’t! There are many planets that have satellites and moons that go in the opposite directions. So that doesn’t work with angular momentum.”

Ben Carson has obviously never played a game of pool. This is Kent Hovind-level stupid. In fact, it’s one of the arguments Hovind has been making for decades. Any scientifically literate person knows that it’s utterly laughable.

“I personally believe that this theory that Darwin came up with was something that was encouraged by the adversary [Satan], and it has become what is scientifically politically correct. Amazingly, there are a significant number of scientists who do not believe it but they are afraid to say anything.”

Oh Jesus Christ, just shut the fuck up now. This guy wants to be president, for crying out loud. 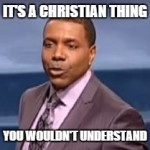 September 24, 2015 In Which a Man #ShoutsHisAbortion
Recent Comments
0 | Leave a Comment
Browse Our Archives
get the latest from
Nonreligious
Sign up for our newsletter
POPULAR AT PATHEOS Nonreligious
1