Star Parker on the Evils of The Gay

Star Parker, the former “welfare queen” who turned her life around after discovering the Lord and his plan for her to become a screeching, self-righteous moral scold for fun and profit, addressed the Values Voters Summit and delivered a rather unhinged anti-gay diatribe, the favorite kind of diatribe for that crowd of bigots. She says the gays are coming for the children — meaning they’re giving homes to foster kids no one else wants.

“We have 500,000 orphans in our foster system,” she said. “Most God-fearing Christians don’t even know we have an orphan system, but those homosexuals know because now that they’re married, that’s where they’re going to get their children, right out of our foster system!”

I know, isn’t that great? Gay couples, and individuals where that is allowed, often adopt foster children that no one else wants because of their race, age or history of disability, and give them a loving, supportive home. You’d think those alleged “Christians” would do that sort of thing, but that still leaves hundreds of thousands of kids without a good home. You’d think she’d be praising this, but since she simply cannot conceive of gay people as human beings, only as evil abstractions, she can’t do that.

Liberals have “declared a war on marriage, weakened women and opened the door to this culture of meaningless,” she warned. “The feminist movement was nothing more than the promotion of monism, the elimination of gender binary. It’s an attack on the Creator, the created, the distinction. He said if we look at marriage, we see Him. Conjugal and sacramental marriage is the capstone of creation and, as a result of its collapse, homosexuality is now dividing us and bringing horrible hostility into the public square.”

By “horrible hostility,” I assume she means “Christian bigotry.” 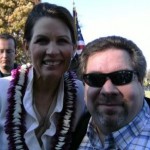 September 30, 2015 Bachmann Still Thinks the End is Near
Recent Comments
0 | Leave a Comment
"Right after Trump is done arresting all the pedophiles like Qanon promised."
Yoav Carlson: Roger Stone Arrest Means Any ..."
"Yeah, but he's starting slowly. By setting up to fire any non-ass-kissers if he's reelected."
Joe_Buddha Bernstein: Give Me Trump or Give ..."
"I confess I cheat by reading the endorsement rationales put out by our lefty Austin ..."
NSAlito Carlson: Roger Stone Arrest Means Any ..."
"Okay."
Azkyroth Bernstein: Give Me Trump or Give ..."
Browse Our Archives
Follow Us!