Ted Shoebat, the Christian fascist son of fake “ex-terrorist” Walid Shoebat, is once again calling for the wholesale extermination of gay people, while admitting that he hates democracy and instead wants a global Christian theocracy that would launch a new “inquisition” to kill, all modeled after the Old Testament law, of course. I certainly hope someone is keeping a close eye on this guy before he goes on a killing spree.

The only solution, he declared, is the imposition of a global law criminalizing homosexuality that will be enforced by a modern-day Inquisition with the power to put gays to death.

“It’s homo tyranny and it needs to be destroyed,” Shoebat continued, “Christian world domination needs to be established and homosexuality needs to be deemed as a crime. And the homos need to be told, hey, you gotta stop that and if they don’t stop that then, I’m sorry, we have an Inquisition and that Inquisition will enact the death penalty, as Scripture tells us.”

Oh yes, those “virtues of heaven” like committing genocide. Seriously, this is exactly the kind of person who snaps and tries to bomb a gay bar, or worse. His father may be a fake ex-terrorist, but I would not be even remotely surprised if Ted turns out to be a real one. 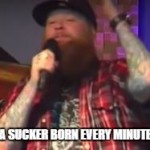 October 1, 2015
Evangelist Claims to Have Raised 35 People From the Dead
Next Post

October 1, 2015 Carson Has No Idea Why the Roman Empire Fell
Recent Comments
0 | Leave a Comment
Browse Our Archives
Follow Us!