Not Racist Texan Paints ‘White Power’ and ‘KKK’ on His Fence

Patheos Explore the world's faith through different perspectives on religion and spirituality! Patheos has the views of the prevalent religions and spiritualities of the world.
And we have yet another example of a totally not racist person being racist. A Houston resident painted “white power” and “KKK” on the steel fence surrounded his house, but he says he’s not a racist at all. His proof of not being racist: He was in prison and doesn’t have any racist tattoos. He says the painted message “has nothing to do with race” and then, literally seconds later, “It does have something to do with race.”


Donald Burns is using the corrugated steel surrounding his southeast Houston property to espouse a message of persecution that some feel is racist. Burns readily admits he is the one who painted the words “white power” and KKK on his fence.

“This is called freedom of speech and it’s supposed to be offensive,” said Burns, who is white and lives in a predominantly African-American neighborhood. “This is here because this is the reaction that I want.”

Burns said he says he painted the signs only to draw attention to his plight, but insist it’s not racism.

To further prove he is not racist, Burns introduced us to an African-American woman he said is his girlfriend and took off his shirt to show he received no white supremacist tattoos during his time in prison for auto theft.

“Since 1977 I’ve been in and out of your prisons, you don’t see no marks of that (expletive) hate on me,” said Burns.

I bet he even lets his girlfriend use his bathroom. 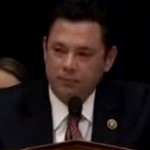 October 2, 2015
Time to Clean House at the Secret Service
Next Post

October 2, 2015 The Worldnetdaily's Problem With Cause and Effect
Recent Comments
0 | Leave a Comment
Browse Our Archives
Follow Us!

Stupid Arguments Christians Should Avoid #51: 3 Stupid...
Alvin Plantinga isn’t above making stupid arguments. Here’s one about the moon...
view all Nonreligious blogs
What Are Your Thoughts?leave a comment
Copyright 2008-2020, Patheos. All rights reserved.