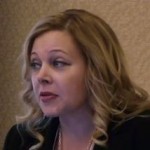 Edwina Rogers, CEO of the Secular Policy Institute (or whatever the hell they’re calling it now; they’re on, I believe, the third name), has an article at Free Speech Now about the First Amendment and separation of church and state that makes some very odd claims in between a bunch of trite and meaningless writing. The problems start with the very first couple paragraphs:

The US Bill of Rights provided 10 constitutional amendments that, first and foremost, discouraged interfering with a true ‘separation of church and state’. In other words, in 1791, our nation’s leaders made explicit the idea that in matters of religion, the government should do its best to butt out.

While this may suggest a secular bent, it does little to undermine the ultimate law of a predominantly religious constitution.

The constitution is “predominately religious”? In what universe, exactly?

This creates many problems for secularists and humanists today. Whom does the First Amendment really protect? It only mentions people of faith. Are the rights of those without a religion covered? If religious and constitutional dogmas are implicitly intertwined, how can the rights of the non-religious be upheld if Congress continues to mind its own business?

The language here is just so odd. The First Amendment does not, in fact, mention “people of faith” at all, it only mentions the free exercise of religion. Given the long history of oppression on the basis of religion, this was a perfectly good idea, a crucial bulwark against tyranny. And the problem here for the non-religious is not that Congress has “minded its own business” but that it has not done so. More on that in a moment.

While the First Amendment does explain that citizens can petition the government with their grievances, it mainly focuses on protecting those of faith and makes no specific provision for non-religious citizens. It states that Congress shall not prohibit the free exercise of any religion, even implying through the clauses on free speech and assembly that proselytising ought to go unfettered by the law.

As well it should, except in specific circumstances. What exactly is she suggesting here, that prostelyzing not be considered protected free speech? Just a bizarre claim.

Our First Amendment, after all, is titled ‘Religion and Expression’, as if religion ought to be the very first freedom we ought to protect.

Wait, what? Who titled it that? Where can that title be found? Not in the Constitution. Again, just a really weird statement. And yes, the religion clauses were the first clauses in the First Amendment, but that includes the Establishment Clause as well as the Free Exercise Clause. The first clause clearly protects the rights of non-believers as well.

Secularism is not a religion; it is diametrically opposed to making this mindset a priority. Therefore, the heading ‘Religion’ does not serve to encompass a secular stance, and from a legal standpoint, the ‘Nones’ are not protected with the same verve as those who have literally any religious viewpoint at all.

Again, there is no “heading” to the First Amendment, or a title. I have no idea where she’s getting this from or why she keeps mentioning it.

More practically, we can look at a problem like the Klu Klux Klan. The fundamentals of the hate group are religious in nature (or so goes the claim), so until individuals cross a tangible legal line – for example, violence or threat of violence – the government cannot prevent such a group from congregating. However, the government can prevent a mother, who does not believe in a divine intervention upon inception of a pregnancy, from getting access to abortion services.

Very strange comparison. The second example has nothing at all to do with the First Amendment religion clauses. And again, is she suggesting that the KKK should not be allowed to advocate their religious beliefs even if they don’t cross a “tangible legal line”? Is she advocating that level of censorship. She doesn’t say. It’s just such a weird article.

The government can (and is encouraged by the First Amendment to) allow companies to make religious-based healthcare decisions for their employees, which consequently infringe on free exercise of secular practices that prevent pregnancy altogether.

This whole article just reads like a bad high school paper written at the last minute by a student who wants to sound like they know what they’re talking about but clearly does not. At this point, Edwina Rogers has become nothing but a bad joke played on the secular community.

October 6, 2015
Even More Carson Ignorance About Evolution
Next Post

October 6, 2015 This is What Happens When Conservatives Run State School Boards
Recent Comments
0 | Leave a Comment
""Ed not only didn't hate values, he consistently and laudably argued we should adhere to ..."
Jose Antonio Saying Goodbye for the Last Time
"A lot of brainwashing."
Atheisticus Yes, the Bible Does Say to ..."
"Because of all the prophecies that have never been fulfilled."
Atheisticus Yes, the Bible Does Say to ..."
"Although solar energy and solar panels have long been considered unknown technology for anyone. Greetings ..."
Anny Wiliams The Practical Path to Clean Energy
Browse Our Archives
get the latest from
Nonreligious
Sign up for our newsletter
POPULAR AT PATHEOS Nonreligious
1