Carson Caught in a Ridiculous Lie

Patheos Explore the world's faith through different perspectives on religion and spirituality! Patheos has the views of the prevalent religions and spiritualities of the world.
Right-wing politics often resembles the television game. Someone out on the extremist fringe makes a claim and it gets repeated and embellished and pretty soon people are declaring it to be the truth. The results are often bizarre. Such is the case with a ridiculous claim from Ben Carson, which PolitiFact rates as a pants on fire lie, that Vladimir Putin, Mahmoud Abbas and Ali Khamenei all went to the same university together.

It sounds like the opening to a joke: A young Palestinian leader Mahmoud Abbas, Iranian Supreme Leader Ali Khamenei and Russian President Vladimir Putin walk into a Soviet-era Moscow university …

But it’s a claim that was made with a straight face by Republican presidential candidate Ben Carson — on national television, three times.

Then, on Oct. 8, Carson said much the same thing to CNN anchor Wolf Blitzer.

Putin “already has substantial ties in the Middle East,” Carson said. “In the class of 1968 at Patrice Lumumba University in Moscow, Mahmoud Abbas was one of the members of that class, and so was Ali Khamenei. And that’s where they first established relationships with the young Vladimir Putin.”

And then again to Andrea Mitchell on MSNBC on Oct. 9: Putin “has longstanding relationships with people in that area. In the class of 1968 at Patrice Lumumba University in Moscow, Mahmoud Abbas was in that class, and so was Ali Khamenei. And that was when they first became familiar with Putin.”

So they contacted the Carson campaign and got this dishonest response:

When we asked Carson’s staff whether they had any supporting evidence, aide Ying Ma wrote back, “Thanks for your inquiry. We are not in the habit of providing Googling support to the media. If there is a specific aspect of Dr. Carson’s statement that you wish to challenge, please let us know and we can go from there.”

Is Ying Ma 12 years old in an internet chat room or is he a fucking adult working for a major presidential campaign? Needless to say, there is absolutely nothing to support this cockamamie claim. Putin was still in the equivalent of high school in 1968, when he was 16 years old, and there is no evidence at all for the claim that Khamenei was ever in the Soviet Union at all, much less studying at this particular university (Abbas did do some academic work in the Soviet Union, but no one seems to know where). So they tracked down what they think is the source of this claim:

The closest we came to any of this making sense was an interview with Cliff Kincaid, who runs a group called America’s Survival, Inc. Kincaid published a paper titled, “Communists and Muslims: The Hidden Hand of the KGB” that raises many of these claims.

Kincaid made the case that Carson was saying Abbas and Khamenei could have been agents of the KGB, and if they were, Putin, who rose to colonel in the KGB, would have known them.

“Carson was clearly saying that Putin, as a former KGB colonel and later head of the FSB, the new name for the KGB, would have knowledge of Abbas and Khamenei attending Patrice Lumumba University, a KGB-controlled institution,” Kincaid told PolitiFact. “That made them subject to KGB influence, if not KGB agents. Whether Putin personally met them in his younger years is beside the point. … Please report these facts rather than nitpick Carson on the ages of the various players.”

We hereby report those “facts.” Still, this isn’t what Carson said.

As usual, Carson is just talking out his ass about things he knows nothing about. 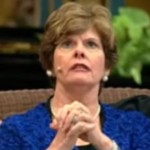 October 11, 2015
Rodriguez Loves Him Some Cindy Jacobs
Next Post

October 11, 2015 Ablow: Wimpy Jews Had the Holocaust Coming
Recent Comments
0 | Leave a Comment
Browse Our Archives
get the latest from
Nonreligious
Sign up for our newsletter
POPULAR AT PATHEOS Nonreligious
1