Kevin Swanson, the deranged bigot who organized this weekend’s “religious liberty” conference in Iowa that will feature several Republican presidential candidates, said on his radio show recently that God sent AIDS as a punishment on gay people because he just loves them so very much. You see, he didn’t kill them right away, he gave them a deadly disease so they’d have the chance to repent and accept Jesus.

While discussing a World magazine article on treatments for people with HIV/AIDS, Swanson said that gay people are receiving too much help from the government, saying they are “especially favored by the government and given a fair amount of support for their homosexual activity and the disease that seems to accommodate their activity.” He went on to say that HIV/AIDS is “God’s retribution to their sexual habit,” citing Paul’s Letter to the Romans and dismissing other interpretations of Paul’s writing as erroneous.

Swanson added that gay people should be glad that God punished them with HIV/AIDS, explaining that it is a sign of “God’s kindness” as it gives them time to think things over and renounce homosexuality, thus saving them from Hell.

“It’s also a wakeup call,” he said. “Be thankful that God doesn’t kill you all at once. He slows you down for a moment, he makes you sick, he gives you a heads-up.”

And yet he still thinks we should kill gay people, whether they have AIDS or not. Wouldn’t that defy the will of God if he really believed this? Oh, there I go again, expecting some sort of coherent thought process by people who aren’t capable of it. And as someone who has buried people I love after they died of AIDS, let me just say this: Fuck you. And fuck your god. 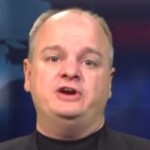 November 4, 2015
Game Over, Folks; Klingenschmitt Has Proven God
Next Post

November 4, 2015 Beware the Atheist Gestapo!
Recent Comments
0 | Leave a Comment
"The Qur'an demands nothing of the sort, which you would know if you had any ..."
Wulf Nesthead Disagreeing with Seth Andrews: Islamophobia is ..."
"Health insurance is really vital."
Dr. Robert Boehland Study: 45,000 Deaths Per Year Due ..."
"If you are fond of programming, then I would like to advise you an excellent ..."
Alex Clark A Modern Day Plato?
"March Madness again....and missing Ed's basketball love and wisdom...... :-("
ChzBoi Saying Goodbye for the Last Time
Browse Our Archives
Related posts from Dispatches From the Culture Wars