Brigitte Gabriel is one of the nation’s most notorious, dishonest, and vitriolic Islamophobes. Like Pam Geller, Robert Spencer, Frank Gaffney and others of their ilk, she sees a Muslim under every bed and is prone to wild conspiracy theories. So obviously she supports Trump’s plan to ban all Muslim immigration and tourism. In fact, she thinks he’s the reincarnation of General Patton:

“I was talking with a friend of mine this morning,” Gabriel said, “and he said to me, ‘Trump is General Patton reincarnated. Trump is General Patton in a suit. General Patton, if he was alive today, he would be talking exactly like Trump, he would be doing exactly like Trump. This is the type of leaders we used to have which made America great, and what Trump is trying to do is make America great again. He is the General Patton of our lifetime.’ It was so interesting hearing those words, because you sit back and you think, Donald Trump, he has a way of saying words, but boy did he touch a nerve nationwide.”

Yeah, advocating Nazi policies has a tendency to touch a nerve. Go figure.

December 12, 2015
Hey Look, Obama Has ANOTHER 'Private Army'
Next Post 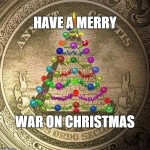