Wow, this video is unreal. A couple of American comics of Brazilian descent were filming a sketch and this incredibly stupid and racist woman pulls over and loses her fucking mind, saying that God told her that they’re terrorists, “faggot child molesters” who fuck each other in the ass, and then some bizarre stuff about how they hate “Middle Easterns.” Seriously, this video should be evidence at a competency hearing. 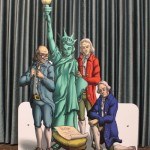 December 27, 2015
Abbott and the FFRF Holiday Display in Texas
Next Post