Jon Ritzheimer, the self-styled “militia” leader who hates Muslims and the government, recorded yet another “I’m going off to conquer tyranny” video. And if you loved his previous videos, like the one where he said he was going to come to Michigan and arrest Sen. Debbie Stabenow or the one where he was going to upstate New York to give some Muslims the stink eye, you’re gonna love this one.

In this one, he’s announcing that he’s going to Oregon to help take over that bird sanctuary headquarters on behalf of two ranchers who don’t even want them there, to fight against the terrible tyranny of not being allowed to burn down 139 acres of federal wildlife refuge (Marxism! Hitler! Pol pot!). And he’s all weepy-eyed as he addresses his wife and daughter, apparently convinced that he’s finally going to get what he so desperately wants, to die in a gunfight with the government so he can become a martyr to dumbass yokels with guns everywhere.

All of this is deadly serious to him, but it just made me laugh. So ridiculous melodramatic, it’s like a teenager going through a breakup. I can’t even feel bad for his wife and daughters, because as painful as him being killed would undoubtedly be in the short run, it can’t possibly be worse than actually living with that douchebag.

January 5, 2016
Trump's First Campaign Ad as Dumb as One Would Expect
Next Post 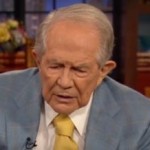 January 6, 2016 Pat Robertson Predicts Fall of Saudi Arabia
Recent Comments
0 | Leave a Comment
Browse Our Archives
get the latest from
Nonreligious
Sign up for our newsletter
POPULAR AT PATHEOS Nonreligious
1