Jones: Obama a ‘Hardcore Wahabbist’ and Member of ‘Al Qaeda’ 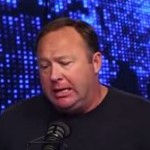 Good old Alex Jones. He can always be counted on for a thoughtful, rational take on the world, can’t he? His latest bizarre diatribe is about President Obama — shocking, I know. He says Obama is a “hardcode Wahhabist; he is al-Qaeda.” His evidence? The false claim that his Kenyan cousin is a Muslim (actually, he’s a Christian) and that he helped him commit terrorism.

“Let me tell you,” Jones said. “He went to madrassas, he went to Muslim schools, he has all these fake names, he’s got family that are Muslims that he wrote letters to as a senator about how to have riots to give him a position in the government and they gave his cousin the prime ministership, and how did the radical Muslims respond? They started blowing up buildings and shooting up shopping malls. And now his little buddies are over here attacking and his answer is, take our guns.”

(Jones was referring to the debunked claim that Kenyan politician Raila Odinga is Obama’s cousin. Odinga is also a Christian, not a Muslim, as Jones suggested.)

What, no claim that Obama is a reptilian? You’re losing your mojo, Alex.

January 7, 2016
Shoebat: Feminists Should Be Burned at the Stake
Next Post 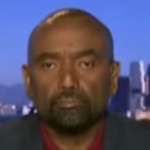 January 8, 2016 Peterson on White Supremacist Show: Liberals Are 'Children of Satan'
Recent Comments
0 | Leave a Comment
Browse Our Archives
get the latest from
Nonreligious
Sign up for our newsletter
POPULAR AT PATHEOS Nonreligious
1