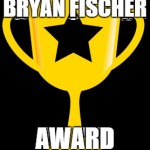 The Bryan Fischer Award is given to those who display a breathtaking lack of self-awareness. Sometimes this manifests itself as accusing one’s opponents of their own worst qualities. In the case of Ted Cruz, it’s showing itself now as pretending that he never does what he does every waking moment, namely wrap himself in his religion for political gain.

Although Rafael’s theological beliefs are sometimes described as more extreme than those of his son, Ted Cruz — along with his wife, Heidi, the daughter of Seventh-day Adventist missionaries — has publicly professed a hardline evangelical faith that hits all the traditional beats of an American theological conservative. Cruz, who identifies as a Southern Baptist, has cited his Christianity while opposing same-sex marriage, calling on pastors to fight abortion laws, and advocating for a vision of religious liberty primarily focused on conservative Christians. He has pointed to the Bible while appealing to widespread evangelical support for settlements in the West Bank, and once led a press conference at Houston’s First Baptist Church (his home congregation) to oppose a local mayor’s attempt to subpoena the sermons of pastors.

Cruz insists he only takes stands on these issues because he feels he has no other choice, not because his faith is “politically useful.”

“I think anyone in politics — you’ve got a special obligation to avoid being a pharisee, to avoid ostentatiously wrapping yourself in your faith,” he said in 2013. “Because I think in politics, it’s too easy for that to become a crutch, for that to be politically useful.”

*headdesk* Holy crap. If there’s anyone in American politics who wraps themselves in their religion more ostentatiously than Ted Cruz, I’d like to hear a name. That is weapons-grade projection.