Patheos Explore the world's faith through different perspectives on religion and spirituality! Patheos has the views of the prevalent religions and spiritualities of the world.
Well this is a very interesting development. The producers of those very dishonestly edited videos purporting to show Planned Parenthood selling fetal tissue have been indicted by a grand jury in Texas. And the best part is, this happened because the prosecutor was asked to investigate Planned Parenthood but the investigation found the other side had violated the law instead.

A Harris County grand jury on Monday indicted the videographers behind undercover recordings of a Planned Parenthood clinic in Houston and cleared the women’s health provider of any wrongdoing.

The indictments — part of the county prosecutor’s investigation into allegations that Planned Parenthood was illegally selling fetal tissue — include charges against anti-abortion activists David Daleiden and Sandra Merritt for tampering with a governmental record. The grand jury handed down a second charge for Daleiden for “Prohibition of the Purchase and Sale of Human Organs,” according to the Harris County District Attorney’s office.

Well that backfired on them beautifully, didn’t it? 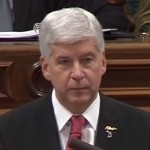 January 26, 2016 Snyder Overruled Emergency Manager on Flint Water
Recent Comments
0 | Leave a Comment
"OnlySky is now live: https://onlysky.media/I am adding Ed to my OnlySky authors shortcuts folder so ..."
Thomas Fitzpatrick Saying Goodbye for the Last Time
"Hi ,for anyone wanting to follow the friendly atheist on Onlysky, it will go live ..."
david coxill Saying Goodbye for the Last Time
"Oh yes.. The privilege of being called names by people who have zero understanding what ..."
Standingbear Gallups: Satan Has Convinced Christians They ..."
"I wouldn't mind idiots saying "Black Lives Matter" IF They Meant it.Clearly that is not ..."
Standingbear Gallups: Satan Has Convinced Christians They ..."
Browse Our Archives
get the latest from
Nonreligious
Sign up for our newsletter
POPULAR AT PATHEOS Nonreligious
1