And Yet Another Stupid Atheist Meme

And Yet Another Stupid Atheist Meme February 6, 2016 Ed Brayton

I come across these memes being shared, sometimes by people I know in real life and like, and it just makes me sad. Here’s another stupid atheist meme that, like many others, provides a simplistic and superficial answer to the question of why people believe in God that allows them to just wave it all away. 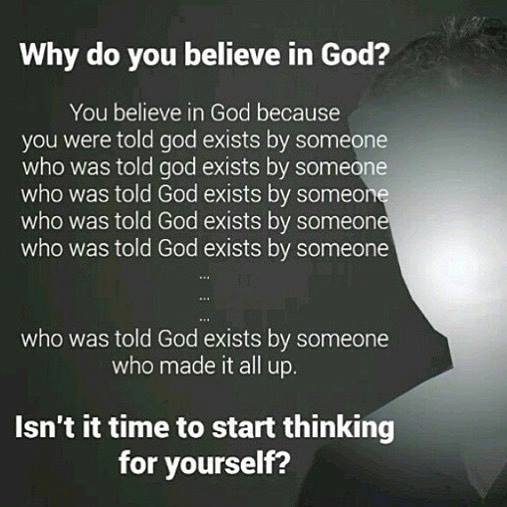 This is very much like other childishly simplistic arguments I hear often from atheists, like “Oh, people just believe in God because they’re afraid of dying” or “religion was just invented to control people.” Does anyone seriously believe that the entire reason anyone believes in god is because someone told them to? If you want to encourage thinking for yourself, start with yourself. And start thinking about the many and varied inputs to religious belief.

If you think that the entire question of why people believe in gods boils down to this facile, simplistic explanation, you’re the one who isn’t thinking for yourself, you’re just repeating inane pablum that allows you to casually dismiss every religious person and all religious belief instead of actually engaging and understanding why people believe the things they do. You’re ignoring a vast amount of literature from neuroscience, evolution, anthropology and social psychology that point to deeper reasons why humans have a tendency to believe in gods, like pattern-seeking and heightened awareness of threats.

You’re ignoring the fact that vast numbers of people believe that they’ve had personal experience with God, that they believe they’ve felt his presence, a fact that a new book by John Wathey seeks to explain scientifically. Now I think they’re wrong about that feeling, which does not require a supernatural explanation, but the feeling is a genuine one and is not reliant on simply being told that there’s a God.

Religion is a very complex subject. If you really think that the whole thing can be summarily dismissed with such a childishly simplistic explanation, you’re as ignorant and dogmatic as any fundamentalist I’ve ever met. You know how irritated you probably get when a Christian says “atheists refuse to believe in God because they just want to keep sinning”? That’s exactly what you sound like when you say moronic shit like this.

February 6, 2016 John Fea on Ted Cruz' Dominionism
Recent Comments
0 | Leave a Comment
Browse Our Archives
get the latest from
Nonreligious
Sign up for our newsletter
POPULAR AT PATHEOS Nonreligious
1