In addition to my series on stupid atheist memes, maybe I should start one on stupid liberal memes too. Here’s a liberal myth I wish would die. I’ve debunked it many times but it is deeply ingrained in liberal thinking, at least among those who pay no attention to the Supreme Court other than to rant about specific rulings now and then. 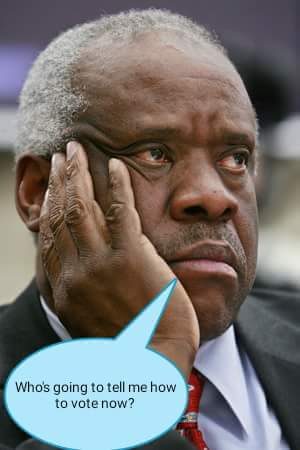 I don’t know where this idea that Clarence Thomas is nothing more than Scalia’s lapdog originated but it is practically a mantra at this point. But it’s completely false. In fact, the opposite is far easier to support. It’s clear to those of us who pay real attention to the court, as opposed to getting outraged at a few rulings once a year, that Thomas has influenced Scalia more than the opposite. He dragged Scalia further to the right.

In his very first week on the court, there was a case in which the initial vote was 8-1, with Thomas as the sole dissenter. When the opinions were initially circulated among the justices, Scalia was convinced by Thomas’ argument and the 8-1 decision became a 7-2 decision. That isn’t the only time that happened, according to Jeffrey Toobin, who based a book on Justice Blackmun’s papers that mentioned these situations.

But the key fact that disproves this myth is this: No one has had more solo dissents as a Supreme Court justice than Thomas. If he merely parroted what Scalia said, that would not be the case. From 2001-2009, no other justice on the court wrote a solo dissent more than 1.3% of the time, which was the lowest percentage in any of those years that Thomas wrote one. He had two years in that span were he was over 4%, a staggeringly high number. If Thomas were merely parroting Scalia, why would he have so many cases in which he refused to join an opinion that Scalia had joined and wrote his own dissent even though he was completely alone in his analysis?

The truth is that Thomas is considerably more radical than Scalia was. He managed to drag Scalia to the right in some cases, but even when Scalia would not go along with his reasoning Thomas went out on his own. Scalia once said that one key difference between him and Justice Thomas is that Thomas has no respect for precedent at all, and he was right.

I also detect a whiff of implicit racism in this very pervasive belief. Even for those who are consciously aware of racism and work to fight it, out subconscious biases make it easier for us to believe that a black man is incapable of thinking on his own and is reduced to merely parroting what white men think. But it simply is not true in this case. Clarence Thomas is very much his own man, with more dangerous views than even Scalia had. 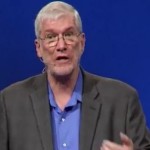 February 16, 2016 Dishonest Headline of the Day
Recent Comments
0 | Leave a Comment
Browse Our Archives
get the latest from
Nonreligious
Sign up for our newsletter
POPULAR AT PATHEOS Nonreligious
1