Oh, how I love Bryan Fischer. The man is almost incomparably irrational and ignorant, not to mention utterly oblivious to his own contradictions. And when he says things like this, I crack up. Abortion, he says, is like “food for demons” and “gives them permission to operate.” Because apparently demons need permission. Who knew?

Bryan Fischer kicked off his radio show today by declaring that “when a nation sacrifices innocent children in abortion or infanticide, that is a sacrifice to demons, it’s like food for demons.”

The act of shedding innocent blood, you say? So does this apply to, say, a drone strike that kills dozens of innocent people attending a wedding? Does it apply to a bombing campaign that kills thousands, collectively millions, of people at times? Or does it only apply to your precious fetuses? 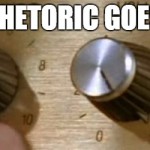