Tim Wildmon, second-generation bigot and leader of the American Family Association, gave a talk at a Christian right conference recently and declared that secular humanism, which he wrongly thinks is the same thing as progressive politics, is satanic. Because of course he did.

“Fundamentally, at its core, secular humanism, if that’s what you want to call it — politically, it’s called progressivism — but it’s the idea that man is God,” he said, “began to become front and center in our culture and it took the place … of the Judeo-Christian worldview. The Judeo-Christian values system that our country was built on is being replaced by secular humanism, which is of Satan.”

Oh boy, the old “humanists think they’re God” argument. That one never gets old, does it? *snore* Write some new material, dolts. 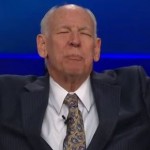 March 10, 2016 Study Finds Wrongful Convictions Rampant in California
Recent Comments
0 | Leave a Comment
"If getting herpes cure was that easy then why do people still suffer from herpes? ..."
Lussie Kanye Psychics Will ‘Cure’ Cancer — For ..."
"As I've said many times, the polls are wrong: https://www.msnbc.com/morni...Besides, one thing that's certain is ..."
S. Arch Supreme Court Justice Jay Sekulow?
"Aged well."
Wade Spencer Conspiracy Theories Never Die: RBG Edition
"This week, with the Times stories about Trump's taxes, the debate shitstorm, and then Trump's ..."
Close Enough Saying Goodbye for the Last Time
Browse Our Archives
get the latest from
Nonreligious
Sign up for our newsletter
POPULAR AT PATHEOS Nonreligious
1