Larry Sabato, one of the most respected political scientists in the country, has put out an updated electoral map based on current polling around the country for the general election. This is for a matchup of Clinton vs. Trump only. The prediction is for a major landslide. 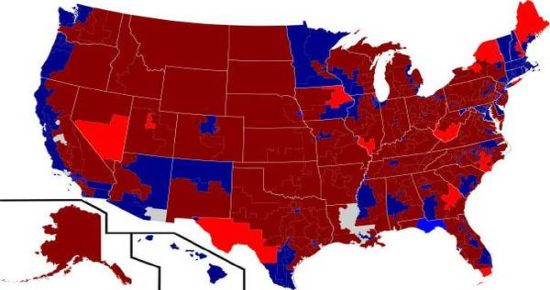 The new map, as you will see, does not show a close and competitive general election. The Republicans now find themselves in a deep hole.

Yes, more than seven long months remain until the election, and all kinds of unexpected twists and turns can occur. Sure, we don’t know the shape of the economy or terrorism, or the precise job approval rating of President Obama in the autumn, or the gaffes and scandals that may yet unfold on our way to the ballot box. But goshdarnit, there’s finally a pause in the non-stop primary calendar, and we’re going to take advantage of that!…

Election analysts prefer close elections, but there was nothing we could do to make this one close. Clinton’s total is 347 electoral votes, which includes 190 safe, 57 likely, and 100 that lean in her direction. Trump has a total of 191 (142 safe, 48 likely, and 1 leans).

Over the years we’ve put much emphasis on the seven super-swing states: Colorado, Florida, Iowa, Nevada, New Hampshire, Ohio, and Virginia. While some will fall to the Democrats less readily than others, it is difficult to see any that Trump is likely to grab. In fact, four normally Republican states (Arizona, Georgia, Indiana, and Missouri) would be somewhat less secure for the GOP than usual. North Carolina, which normally leans slightly to the GOP, would also be well within Clinton’s grasp in this election after being Mitt Romney’s closest win in 2012. 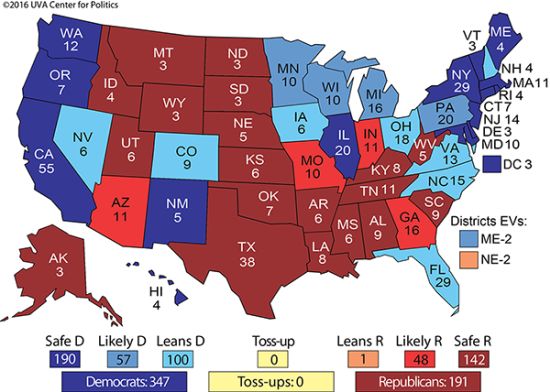 It’s early, of course. Much can happen between now and November. I still wouldn’t be surprised to see Trump not get the Republican nomination and to run as an independent instead, which would make it even more likely that the Democrats would win the White House.

April 3, 2016
Temple Replica Could Open a Portal to Evil!
Next Post

April 3, 2016 Nugent Posts, Deletes Racist Image
Recent Comments
0 | Leave a Comment
"The Qur'an demands nothing of the sort, which you would know if you had any ..."
Wulf Nesthead Disagreeing with Seth Andrews: Islamophobia is ..."
"Health insurance is really vital."
Dr. Robert Boehland Study: 45,000 Deaths Per Year Due ..."
"If you are fond of programming, then I would like to advise you an excellent ..."
Alex Clark A Modern Day Plato?
"March Madness again....and missing Ed's basketball love and wisdom...... :-("
ChzBoi Saying Goodbye for the Last Time
Browse Our Archives
Related posts from Dispatches From the Culture Wars