Kamal Saleem is a B-team fake ex-terrorist (the biggest name among fake ex-terrorists is Walid Shoebat) who lives here in Michigan. Like the rest of that crowd, he’s given to vastly overblown conspiracy theories and manic stupidity, which explains why he went on the Alex Jones show.

Saleem told Jones that “the isms are coming together: Islamism, socialism, secularism, fascism, liberalism, secularism, all of them are part of the ism movement for the Last Days and they are united together for a one-world order” and “world government.”

Saleem, who appeared to be reading off a list of talking points throughout the interview, said that the “New World Order” is targeting Christians and Jews by trying to “take God and prayers out of education system, reduce parental authority over children, destroy the traditional Christian family structure, if sex is free then abortion should be legal and free, make divorce applicable to everybody so marriage has no value, homosexuality to be alternative lifestyle, debase art and make it to run man, use media to promote and change mindsets.”

*yawn* Heard it so many times. Everyone they hate is all in it together because my enemies are all friends and plotting against me. But as Right Wing Watch notes, Saleem is rather infamous for his ridiculous pronouncements.

Saleem predicted that at the beginning of 2013, Secretary of State Hillary Clinton would impose a “hate crime bill which will subjugate American people to be arrested and put to jail and their churches and synagogues shut down” and “break the First Amendment and Second Amendment.”

How in the world he thinks the secretary of state can pass a law is a question best left to those who specialize in right-wing hysteria.

He has also claimed that the White House established an Islamic “shadow government” that is in part led by a non-existent Obama family babysitter: “Our President’s babysitter wears abaya and keffiyeh just like those ninjas, you don’t see her face everything is covered, that’s the babysitter of his children.”

Christian, Jewish and business leaders, according to Saleem, are all pushing the Islamist agenda, and now there are even many U.S. generals “who swore to destroy the United States of America.”

In addition, Saleem says that the Roe v. Wade ruling was made to usher in Sharia law.

So yeah, you might want to take anything he says with a chunk of salt the size of Montana. 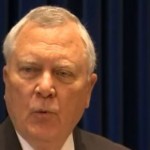 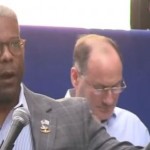 April 18, 2016 Allen West Does the 'I'll Serve if Called' Thing
Recent Comments
0 | Leave a Comment
Browse Our Archives
get the latest from
Nonreligious
Sign up for our newsletter
POPULAR AT PATHEOS Nonreligious
1