David Keene’s conservative credentials are unimpeachable. The longtime leader of the American Conservative Union and the NRA has been hugely influential in conservative circles for decades. But he’s had his fill of the far-right paranoid conspiracists like Ted Cruz adviser Frank Gaffney:

One of today’s leading conspiracy buffs is Frank Gaffney, founder and president of the Center for Security Policy who has managed to convince himself that anyone with whom he disagrees is not just wrong but an agent of one conspiracy or another.

In an earlier incarnation, the man did yeoman’s work as a Reagan-era defense appointee popularizing and fighting for missile defense and regularly appeared in these pages, but when he sought an even better Pentagon job under Mr. Reagan’s successor and lost out to someone else, he convinced himself that he was blocked by Soviet agents within our own government.

He really went off after 9/11 though, convinced that the Muslim Brotherhood and its paid agents within the United States were in virtual control of President George W. Bush’s foreign policy by virtue of the Bush White House’s friendship with Grover Norquist of Americans for Tax Reform. Most who knew Mr. Norquist saw him as a limited government advocate of tax reduction, but Mr. Gaffney was not fooled; he just “knew” Mr. Norquist was and is a closet jihadist bent upon delivering the west into the hands of our Middle Eastern enemies.

The dispute began over office space and got worse. Mr. Norquist’s decades-long history of voter outreach to all kinds of minority groups included a very successful effort to get American Muslims to vote Republican in 2000. After 9/11, Mr. Gaffney concluded that those efforts and the fact that Mr. Norquist was married to an American of Palestinian descent who attended the same high school he did in Massachusetts added up to conclusive evidence of Mr. Norquist’s involvement in the jihadist conspiracy to bring down America…

Later, he wrote approvingly of rumors that President Obama was born not in the United States, but in Kenya and began claiming that the new president was working consciously to impose Sharia law on the people of the United States and claimed that Democrats in Congress were acting as if they were taking lessons from the Muslim Brotherhood…

One hopes that is what they will do and that Mr. Gaffney will, like the folks at Group Research, Mr. Hoover’s aides and most conspiracy nuts of yore will vanish into the fever swamps from which he came.

The fact that a total crackpot like Gaffney is taken seriously by Ted Cruz speaks volumes about him and is a damn good reason not to let Cruz get anywhere near the White House. 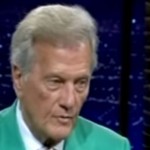 April 20, 2016 Perkins: Anti-Discrimination Laws are 'Forced Servitude'
Recent Comments
0 | Leave a Comment
Browse Our Archives
get the latest from
Nonreligious
Sign up for our newsletter
POPULAR AT PATHEOS Nonreligious
1