Espuelas, however, pointed out that “the idea that someone who has a business license can then discriminate against one group or another is something that was put to rest in the 1960s.”

“We’re talking about forcing someone to take their creative ability, their talent and force them,” Perkins insisted. “This is almost forced servitude, saying that you have to be a part of this or the state is going to punish you.”

Perkins disagreed: ‘We’re talking about marriage. That is a sacred institution. Just three years ago the president had the same view.”

“No one can deny that marriage is a religious ceremony,” Perkins insisted. “And you’re forcing someone to violate their beliefs.”

Yep. Just like the law has required for more than 50 years in regard to interracial marriages. So businesses should be allowed to discriminate against interracial couples, right Tony? After all, you’re “forcing someone to violate their beliefs.” So that’s forced servitude too, by your own “reasoning,” isn’t it? In fact, the fact that a business cannot refuse to serve someone because of their Christianity, isn’t that “forced servitude” too? Please, sling us some bullshit to try to make a coherent argument for why not. 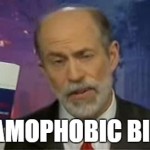 April 20, 2016 Bryan Fischer Award Winner: Donald Trump
Recent Comments
0 | Leave a Comment
"OnlySky is now live: https://onlysky.media/I am adding Ed to my OnlySky authors shortcuts folder so ..."
Thomas Fitzpatrick Saying Goodbye for the Last Time
"Hi ,for anyone wanting to follow the friendly atheist on Onlysky, it will go live ..."
david coxill Saying Goodbye for the Last Time
"Oh yes.. The privilege of being called names by people who have zero understanding what ..."
Standingbear Gallups: Satan Has Convinced Christians They ..."
"I wouldn't mind idiots saying "Black Lives Matter" IF They Meant it.Clearly that is not ..."
Standingbear Gallups: Satan Has Convinced Christians They ..."
Browse Our Archives
get the latest from
Nonreligious
Sign up for our newsletter
POPULAR AT PATHEOS Nonreligious
1