Roger Stone has been trying to delete as many of his racist, sexist and homophobic tweets as he can lately but there’s just so many of them. Media Matters has kept digging and keeps finding more and more of them, which Stone will, of course, deny are the least bit bigoted at all. You be the judge.

Gee, I can’t imagine why anyone would think he was a bigot, can you? But I certainly understand why he’s so close with Trump. Two peas in a childish pod.

April 25, 2016
White Supremacists and Nazis Getting the Band Back Together
Next Post 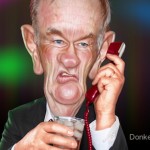 April 25, 2016 Bill O'Reilly Doesn't Know What Words Mean
Recent Comments
0 | Leave a Comment
Browse Our Archives
get the latest from
Nonreligious
Sign up for our newsletter
POPULAR AT PATHEOS Nonreligious
1