Not content with telling state officials that it’s okay to ignore the Supreme Court’s ruling on same-sex marriage, now the theocrats — and I don’t mean routine Christian right folks, I mean actual theocrats — are demanding that they ignore Roe v Wade and endorse old anti-abortion laws.


Herb Titus, a Christian Reconstructionist attorney and longtime lawyer for Alabama Supreme Court Justice Roy Moore, spoke to a radical anti-abortion conference last month, where he called on governors and other state officials to defy Roe v. Wade and enforce prohibitions on abortions in their states…

Durbin and Titus discussed what should be done about states that still have criminal prohibitions on abortion on their books that aren’t being enforced because of Roe v. Wade, agreeing that those prohibitions are still valid if state officials would be brave enough to enforce them.

“You’re dealing with two different courts,” Titus said. “The court of public opinion, it’s very important to disabuse people thinking that Roe v. Wade legalized abortion. That’s impossible. That’s impossible. The court can’t make straight what God has made crooked, they can’t deny to a baby the full protection of laws prohibiting homicide, it just simply isn’t true. So the rhetoric we engage in is very, very important or otherwise people would think that we’re challenging a legal rule. No, we’re not, we’re challenging a rule that is based upon illegitimate statement of facts and assumption of law.”…

“The governors of states in today’s political climate are very reluctant to interpose between the people of the state and of the Congress or of the court,” he said, “and there has to be a cultivation amongst the lower magistrates, such as governors and attorneys general, to recognize that they have a moral and legal obligation to stand on the law and not just hide behind the skirts of the court that has decided a case in the wrong way.”

“It’s extremely important for the states to step up to the plate and get back to the business of protecting innocent life and not allow the federal courts to push them around,” he added.

I have some mutual friends with Herb Titus. Many years ago, they assured me that I was wrong in saying that he was a Christian Reconstructionst and they put me in touch with him. We spoke on the phone and he sent me some things he’d written on the subject. And technically, he’s not a Reconstructionist, but only because of some minor theological differences with them. He is most certainly a theocrat, and his claim here that “the court can’t make straight what God has made crooked” proves that. If we are to apply that standard, much of the Constitution and the ideas of personal liberty is gone. 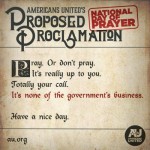 May 5, 2016
Happy National Day of Violating the Constitution
Next Post

Nonreligious
From the Archives: Answering a 'Christian Nation' E-mail
Dispatches From the Culture Wars
TRENDING AT PATHEOS Nonreligious