Trump: Kelly Interview Proves I Did Nothing Wrong

Trump: Kelly Interview Proves I Did Nothing Wrong May 20, 2016 Ed Brayton

Gee, who couldn’t have seen this coming? After his interview with Megyn Kelly the other day, when he kinda sorta expressed regret at calling her a bimbo, he now says that the fact that she agreed to interview him proves that he didn’t do anything wrong toward her at all.

The reason, according to Trump himself, is that the interview was actually proof that he never mistreated Kelly at all. Speaking on a local Oregon radio station on Monday before the interview with Kelly aired, Trump said Kelly would not have asked him for a one-on-one if he was really all that sexist.

“Megyn Kelly called me — I didn’t call her, she called me, which I respect that she called me,” Trump told KXL News in Portland. “I say it with respect. And If I said something so bad, She wouldn’t have called me.”

This isn’t the first time Trump has suggested that his interview with Kelly proved his innocence. Speaking in front of a crowd of Oregonites earlier this month, Trump said that Kelly’s request for an interview was proof that he wasn’t really talking about her period when he said Kelly had “blood coming out of her whatever.”
“She called me. She said I’d like to see you,” Trump told the audience. “Now, if I was wrong, she wouldn’t have done that. And I respect her for doing it.”

It’s his longstanding pattern: Never, ever admit that you could possibly have done something wrong. And make any excuse you have to make for that, no matter how ridiculous it might be. All part of his rather obvious narcissism. And I doubt Megyn Kelly cares. She got what she wanted, high ratings for the special to kick off her attempt to be the next Barbara Walters. 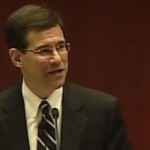 May 20, 2016 Bryan Fischer Award: Glenn Beck
Recent Comments
0 | Leave a Comment
Browse Our Archives
get the latest from
Nonreligious
Sign up for our newsletter
POPULAR AT PATHEOS Nonreligious
1