Whenever anything happens in the news that might be controversial, we can always count on Rick Wiles to offer a calm, reasoned, thoughtful analysis of the store. So when the Obama administration issued its directive on trans students using school bathrooms, he very calmly replied, OBAMA AND SATAN WANT TO RAPE YOUR CHILDREN!

Wiles predicted that most parents and school officials will “cave” and “sacrifice their children at the altar of sexual perversion,” while those who protest will be “beaten in the streets with batons” and “hosed down with firehoses.”

“I’m going to tell you where I think we’re going: civil war,” he said. “I believe this is the opening shot from Obama for civil war.”

This led Wiles to go on a birther-tinged rant about how President Obama (and Satan) intend to “rape your children”:

We’re living in a funhouse. In a house of horrors. The president — the fake president, he’s a fake president, he’s not a legitimate American president, he’s a fake and he’s been allowed to do these wicked things for eight years because there’s been no resistance to him, and now he’s going for it, he’s got the pedal to the metal. He’s coming into the schools to rape your children. Let’s be honest about it. Satan wants to rape your children. I’m telling you, there’s going to be confrontation in the country. There will be a group of people who just say, ‘This is it, I’m done, at this point, we resist and we’re pushing back.’

Hey, why are you still in this country? You were leaving after the same-sex marriage ruling, about which you said pretty much the same thing. 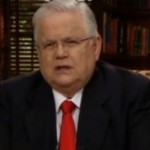 May 20, 2016 Hagee: God Will Punish You if You Don't Vote for Trump
Recent Comments
0 | Leave a Comment
""Ed not only didn't hate values, he consistently and laudably argued we should adhere to ..."
Jose Antonio Saying Goodbye for the Last Time
"A lot of brainwashing."
Atheisticus Yes, the Bible Does Say to ..."
"Because of all the prophecies that have never been fulfilled."
Atheisticus Yes, the Bible Does Say to ..."
"Although solar energy and solar panels have long been considered unknown technology for anyone. Greetings ..."
Anny Wiliams The Practical Path to Clean Energy
Browse Our Archives
get the latest from
Nonreligious
Sign up for our newsletter
POPULAR AT PATHEOS Nonreligious
1