Staver and the ‘Lie from the Pit of Hell’

If there’s one phrase the Christian right seems to love, it’s “lie from the pit of hell.” Paul Broun said that about evolution and the big bang and now Mat Staver, the dumbest lawyer in America not named Larry Klayman, has used it about same-sex marriage. 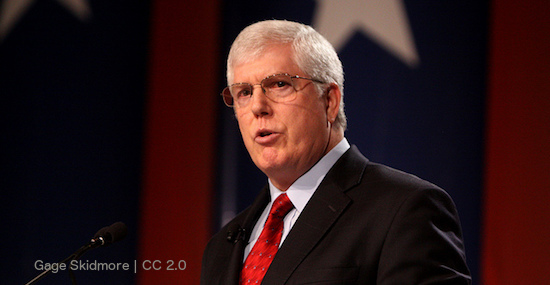 Staver, who gained notoriety for representing Kentucky clerk Kim Davis during her attempt to defy the ruling, compared gay rights advocates to communist dictators who sought to suppress religious groups, predicting that Davis “is not going to be the last one jailed.”

Same-sex marriage, Staver said, “puts every household at risk because same-sex marriage, by its nature, says that, ‘boys and girls, you don’t need moms and dads,’ that they are completely irrelevant, that two men or two women are just as good as a mother and a father and that’s a complete lie from the pit of hell. It’s just simply not true. To deprive forever a boy of ever having the opportunity of a father or a mother or a girl of a father or a mother is damaging and we will see the damage that is ultimately reaped against these children as they grow up and become our future leaders.”

Now if only there was such a thing as hell, this might be a valid point. But there isn’t. That’s a profoundly ridiculous idea. It’s a lie from the pit of mythological history.

June 23, 2016 Tarico: Trump is a Lot Like the Biblical God
Recent Comments
0 | Leave a Comment
"OnlySky is now live: https://onlysky.media/I am adding Ed to my OnlySky authors shortcuts folder so ..."
Thomas Fitzpatrick Saying Goodbye for the Last Time
"Hi ,for anyone wanting to follow the friendly atheist on Onlysky, it will go live ..."
david coxill Saying Goodbye for the Last Time
"Oh yes.. The privilege of being called names by people who have zero understanding what ..."
Standingbear Gallups: Satan Has Convinced Christians They ..."
"I wouldn't mind idiots saying "Black Lives Matter" IF They Meant it.Clearly that is not ..."
Standingbear Gallups: Satan Has Convinced Christians They ..."
Browse Our Archives
get the latest from
Nonreligious
Sign up for our newsletter
POPULAR AT PATHEOS Nonreligious
1