FRC Pretends it Favors Religious Liberty for All

NPR did a story recently about the Christian right struggling with the question of whether religious liberty applies to Muslims or not. Travis Weber immediately took to the Family Research Council blog to claim that the FRC is in favor of religious liberty for everyone:

Turning to NPR’s story, the answer is: Yes, religious freedom goes for all faiths. This is clear enough from the positions most conservative, Christian advocacy groups take on the issue, confirmed by their support for RFRA and Free Exercise rights (which by their legal methodology naturally apply to all faiths). Family Research Council recently made this very clear in articulating our actual position on religious liberty, instead of what it is often perceived to be. Sensible people understand that security needs do not justify (and are even impaired by) blanket religious discrimination. Indeed, as security expert Dr. Sebastian Gorka pointed out the other day at FRC, one can address security concerns intelligently and efficiently, while preserving the religious liberty we hold dear for all faiths.

And he would have convinced me if not for all that, ya know, evidence that proves that this is nonsense.

Perkins and his Family Research Council colleagues have not consistently advocated for religious liberty for people of all faiths. For example, when Religious Right groups were rallying opposition to the misnamed “Ground Zero Mosque,” FRC’s Ken Blackwell was among them. Perkins said just last month that banning Muslims from immigrating to the U.S. would not be imposing a religious test because “only 16 percent of Islam is a religion.” He has said that people are free to make their own theological choices, but that our nation was founded on “Judeo-Christian principles” and that “those who practice Islam in its entirety” will “destroy the fabric of a democracy.”

Retired Gen. Jerry Boykin, now FRC’s executive vice president, has also pushed the idea that Muslims do not deserve the protection of the First Amendment because Islam “is not just a religion, it is a totalitarian way of life.” On Bryan Fischer’s radio show in 2011 Boykin declared, “No mosques in America,” explaining, “A mosque is an embassy for Islam and they recognize only a global caliphate, not the sanctity or sovereignty of the United States.”…

And Perkins has also criticized the military for accommodating “fringe religions” andsuggested that it is not the government’s role “to try to put all religions on the same plane.”

And if “most conservative, Christian advocacy groups” include the American Family Association, you’ve got Bryan Fischer who says outright that the First Amendment applies only to Christians, never to Muslims or anyone else. And you have the American Center for Law and Justice, which filed suits to prevent the opening of the Ground Zero Mosque. No, the truth is that when the Christian right says religious freedom, what they really mean is Christian privilege, each and every time. 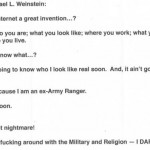 July 2, 2016 Barton: Trump is 'God's Candidate' Because Christians Voted in Primaries
Recent Comments
0 | Leave a Comment
"OnlySky is now live: https://onlysky.media/I am adding Ed to my OnlySky authors shortcuts folder so ..."
Thomas Fitzpatrick Saying Goodbye for the Last Time
"Hi ,for anyone wanting to follow the friendly atheist on Onlysky, it will go live ..."
david coxill Saying Goodbye for the Last Time
"Oh yes.. The privilege of being called names by people who have zero understanding what ..."
Standingbear Gallups: Satan Has Convinced Christians They ..."
"I wouldn't mind idiots saying "Black Lives Matter" IF They Meant it.Clearly that is not ..."
Standingbear Gallups: Satan Has Convinced Christians They ..."
Browse Our Archives
get the latest from
Nonreligious
Sign up for our newsletter
POPULAR AT PATHEOS Nonreligious
1