David Barton and the ‘Out of Context’ Claim

David Barton has never, ever, admitted to being wrong about anything. Hell, he won’t even admit to saying the things he’s on record, on video, saying. When he’s accused of saying something outrageous, he just says he was quoted “out of context.”

And David Barton, a committee member from Texas, believes that God is preventing the medical profession from finding a cure for HIV/AIDS, and claimed that gay people die “decades earlier” than others and have more than 500 partners apiece in their lifetimes.

Barton told The Daily Beast that these statements did not represent his views, and this was “an example of something taken out of context and mischaracterized. I’m an advocate for faith-based conservative values, which include love, grace, and truth, focusing on traditional family values.”

Okay, let’s get the actual quote about God preventing a cure for AIDS:

He’s actually said this many times, not just this once. But here’s the thing: If you say you were taken out of context, the burden is on you to show the context that changes the meaning of the quote in isolation. If you can’t do that, you’re just lying. Barton, of course, lies about as often as he takes a breath. And he’s lying here. That absolutely is his position and he has stated it repeatedly. 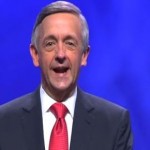 July 14, 2016
Jeffress Would Vote for Trump Over Jesus
Next Post