Is Trump the Most Shameless Liar We’ve Seen in Politics?

Is Trump the Most Shameless Liar We’ve Seen in Politics? August 7, 2016 Ed Brayton

Every politician lies. Hell, every human being lies, and if you say you don’t you’re lying. But in Donald Trump, we’re seeing a level of dishonesty that is so shameless that it’s kind of astonishing. Here’s a perfect example. He now says he doesn’t have crying babies thrown out of his speeches.

It’s all the media’s fault! Can you believe they actually said that I ordered a baby thrown out of a campaign rally? I would never do that! Uh, Donald…we have it on video.

Not only did you have a baby thrown out, you pretended to be so lighthearted and magnanimous as to let the baby stay, saying you love babies, then two minutes later flipped and told them to get the baby out of there. And on top of that, you mocked the mother, telling the crowd how ridiculous it was that she actually believed you that you were okay with a baby crying during your speech. And now you’re claiming you don’t do what we all saw you do on video.

It all reminds me of that old scene where the wife walks in and finds her husband in bed with another woman and he denies it. The wife says, “I walked in on you having sex with her.” And the husband says, “Who are you gonna believe, me or your lying eyes?” It’s absolutely shameless.

August 7, 2016
'Godly' Legislator Has Cyber Sex, God Tells Him Not to Resign
Next Post 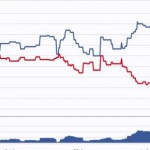 August 7, 2016 Trump Fans 'Unskewing' Polls and Even (Allegedly) Doing Their Own Polls
Recent Comments
0 | Leave a Comment
Browse Our Archives
get the latest from
Nonreligious
Sign up for our newsletter
POPULAR AT PATHEOS Nonreligious
1

'Satanic' school head, pictured with a...
The Freethinker
Related posts from Dispatches From the Culture Wars