WND: Evidence of Flood is Proof of Noah!

The Worldnetdaily uses the standard Young Earth Creationist tactic of claiming that evidence of any flood anywhere is evidence of one huge flood that buried the entire planet. It’s a monumentally stupid argument, of course, which is why it’s being published by WND. 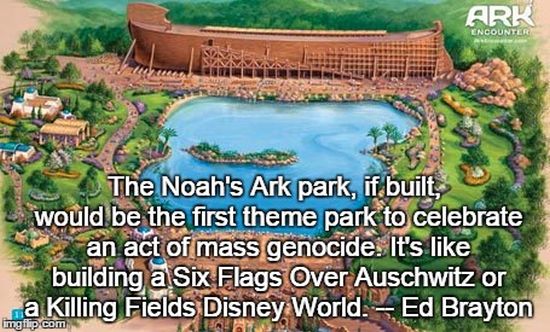 Scientists have made an eye-opening discovery in China that may point to a catastrophic biblical flood nearly 4,000 years ago.

Archaeologists uncovered and dated the bones of children found in the Yellow River Valley. The children are believed to have been trapped by a massive flood around 2000 B.C., around the time many Christians believe the biblical story of Noah and the Flood took place.

There’s nothing “eye-opening” about this discovery. It’s a river valley of one of the largest rivers in the world. It has undoubtedly flooded many, many times since the beginning of human civilization there. That’s what rivers do, quite regularly.

According to Chinese legend, a great flood deluged settlements, spilled over hills and mountains and even reached the heavens. It’s said that King Yu made the waters recede by constructing large ditches, and he founded China’s first dynasty, the Xia. However, no evidence of Yu or the Xia Dynasty has been uncovered.

So it’s a pretty common mythology, taking real events, exaggerating them greatly and providing some fanciful explanation for them.

Nonetheless, researchers have now published an Aug. 5 study in the journal Science indicating a massive flood submerged large swaths of China. The team, led by Wu Qianlong, believes an earthquake triggered a large landslide and dammed a waterway in 1920 B.C. The scientists believe 4 trillion gallons of water submerged the North China Plain. They used radiocarbon dating and soil samples to reach their conclusion.

Wait, I thought carbon dating was inaccurate and unreliable? Oh, sorry. My mistake. That’s only true when it dates things older than 6000 years. Very convenient, that. But again, nothing unusual about this. Floods happen all the time. There is massive flooding right now in the southern United States. If some geologist comes along in a couple thousand years and discovers the evidence of that flood, he would be quite foolish to conclude that this is evidence that the entire planet was covered with water and every living thing except those on the ark was killed in the flood.