Rachel Maddow highlighted a story Wednesday night that I can’t believe I didn’t think about earlier myself. It involved a consent decree issued in 1981 that forbids the Republican party from engaging in the kind of poll-watching that Trump is now recruiting his followers to engage in.

I should have thought of this because I’ve reported on that case and the consent decree several times back when I was with the Michigan Messenger. Maddow explains why Trump’s plans are exactly what the GOP did in New Jersey in 1981 that prompted that order. The consent decree is supposed to expire in December, 2017, but that isn’t going to happen now. The DNC has filed a lawsuit to reopen that case, forbid Trump from doing what he is trying to do, and extend the consent decree even longer.

The RNC’s response to all of this is essentially “Hey, we don’t coordinate this stuff with the Trump campaign, we’re not involved.” That argument is not going to fly in court.

Maddow explains all the details: 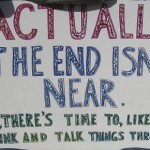 October 28, 2016 How Donald Trump Expresses His Condolences
Recent Comments
0 | Leave a Comment
Browse Our Archives
get the latest from
Nonreligious
Sign up for our newsletter
POPULAR AT PATHEOS Nonreligious
1